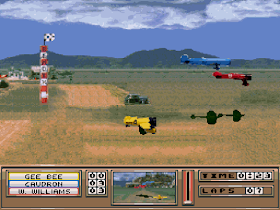 Genre: Action, Racing / Driving
Gameplay: Arcade, Shooter
Vehicular: Flight / Aviation
Published by: Information Global Service
Developed by: NovaLogic
Released: 1992
Platform: Super Nintendo (SNES)
Very beautiful arcade on the Disney film. During the four big levels, we have to fight (with a third-person view from the side), fly on a biplane, then on a jetpack (fighting the Nazis on the same jetpacks), finally - on a truly amazing machine (the view is everywhere also on the side). Well, the game will end with a terrific battle on the tail of the airship (with a third-person view).
The gameplay can not be called original in any way, yes, but that's what should be noted especially - it's just a revolutionary for its time graphics, why the game in The Rocketeer delivers simply indescribable pleasure. Unfortunately, you can not say more about it - it is wonderful, but too "logical". Nevertheless, this is a classic, so if someone else is not familiar - play it by all means.
‹
›
Home
View web version