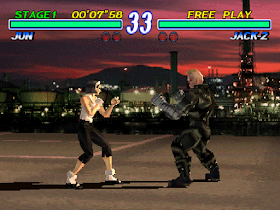 Genre: Action
Perspective: Side view
Gameplay: Fighting
Visual: 2D scrolling
Art: Anime / Manga
Narrative: Martial Arts
Published by: Namco Hometek Inc.
Developed by: Namco Limited
Released: 1996
Platforms: PlayStation (PSX, PS1), Arcade Machine
If there have been disputes so far, which of the many fights is now the best, then with the release of the game Tekken 2, these disputes should stop. Of course, we can not say that this game is perfection in all respects. Some characters seem even less expressive than in the original version, and look - how to say - somewhat metallic. But they are all beautifully drawn and move much more realistically than before. The plot line became much richer. The introductory plot looks good: it not only reveals the essence of intrigue, but also gives a lot of interesting information about all the characters and their history. If you already like the first version of the main character of this action - Kazuya, now you can learn some facts of his biography, which you will not seem very nice. And one more important detail. In Tekken 2, a lot of hidden surprises and secrets - for example, secret characters. All secrets can be saved on an additional memory card for later use. And if you do not have such a board, it's best to spend it and buy it before you buy this game, otherwise you will not be able to fully appreciate the merits of Tekken 2.
‹
›
Home
View web version