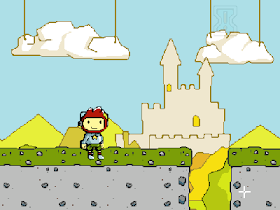 Genre: Action, Puzzle
Perspective: Side view
Gameplay: Platform
Interface: Direct Control, Point and Select
Published by: Warner Bros. Interactive Entertainment Inc.
Developed by: 5TH Cell Media
Released: 2010
Platform: Nintendo DS (NDS)
Any puzzle consists of a goal and means. It is necessary to go through the tests of bitchy artificial intelligence - here you have portals. Collect the lines in the glass - rotate the figures. Calculate time in the new "Professor Leighton" - please, a special rough screen, drive with a stylus.
Scribblenauts satisfies only the first point. Drawing boy Maxwell collects stars - this is clearly the goal. And how to achieve it, you need to think up yourself. And if the original Scribblenauts is a puzzle for improvisation, then Super Scribblenauts is, it turns out, a super-game about super-improvisation.
Freedom of your thought is as follows. Maxwell with the stars is divided by a cloud of obstacles: walls, abysses, heights, thorns, falling stones - in short, a set of any platformer. Maxwell himself is a sickly guy, he runs slowly, jumps like an ant, and from any spittle he dies in two counts. Therefore, he needs to help objects, but you do not collect them according to the level, as in any quest. You can just conjure up almost any English word, and it will immediately appear on the screen. You go into a special editor, write a "ladder" - and now it has fallen off the sky, just drag it with the stylus to the desired position. In no way without a bridge - six Latin letters, and Maxwell is already on the other side. The difference between Scribblenauts and Super Scribblenauts in this plan is small: the control has been slightly changed (now it is possible at any moment to switch from the "move the hero with the stylus" mode to the "move the hero with the arrows" mode), and the game has learned to understand the qualities of objects. That is, if you need not Cthulhu, but a great flying Cthulhu, so write.
It is clear that with such opportunities, any level immediately turns into a fun circus. You can summon the Russian Tsar and force him to fight the dragon. Or put knights in the car and drop a bomb on them. And it's better to invite the Lord God and check if he defeats the group of assassins. Or the devil. Or a ballerina. And if you throw a truck on them? And if you shoot a robot from a tomgun? Fun - no words! It's obviously more fun, actually, the levels: by the second part they have become more, but not more inventive. More and more ordinary pits. But, to be sure, you can throw up here the giant apples of the headmaster.
And now one important thing. Let's honestly admit that even the last of the intelligentsia who goes to the opera and ballet theater on Friday nights, quotes classics and dresses for dinner in a snow-white shirt, quickly gets bored with a standard politically correct set of bombs and knights. Items in Super Scribblenauts abound enough to solve puzzles, but criminally little to fool around. Everyone sooner or later will want to write "big cock with legs", meaning not a rooster at all, want to make a spider-man and fight with a non-rooster, want to send on all the giant Gryzlov Man who will burp acid and throw dead cats.
Super Scribblenauts on such requests, of course, will not respond - either too illegitimately, or too obscene, or too difficult. Set the size of the objects - it's great, but from the continuation of the most insane pampering on the DS, you still expect a little more space for creativity. It's super, after all.
‹
›
Home
View web version