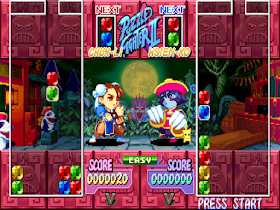 Genre: Puzzle
Gameplay: Falling Block Puzzle
Pacing: Real-Time
Published by: Capcom Co.
Developed by: Capcom Co.
Released: 1996
Platforms: Arcade Machine, PlayStation (PSX, PS1)
Something like Tetris for two players, with eight nice (chibi-style) characters from various fighting games produced by Capcom (more precisely, from the series Dark Stalkers and Street Fighter Alpha). In the "glass" pairs of colorful crystals fall, which need to be stacked faster and better than the rival does, and then break up the contacting crystals of the same color with the corresponding sphere. If you build a rectangle from the same crystals, they will merge into one large crystal, for the explosion of which gray bricks fall in the opponent's glass, which prevent the crystals from exploding. Particularly successful combinations are accompanied by a funny animation of the two competing characters at the moment.
‹
›
Home
View web version