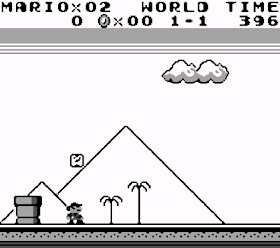 Genre: Action
Perspective: Side view
Gameplay: Platform, Shooter
Visual: 2D scrolling
Published by: Nintendo of America Inc.
Developed by: Nintendo R&D1
Released: 1989
Platform: Game Boy (GB)
As a side-scrolling game and the first in a series of Super Mario Land games, Super Mario Land is similar in the gameplay to its ancestors: as Mario, the player moves to the end of the level, moving to the right and jumping over platforms to avoid enemies and traps. In Super Mario Land, Mario travels to Sarasaland to save Princess Daisy from Tatanga, an evil cosmonaut. Two of the twelve levels of the game - active scrolling in the style of Gradius, where Mario leads a submarine or plane and shoots projectiles in the direction of opposing enemies and bosses. Levels end with a complex platform to reach an alternative exit, located above the usual exit. The first leads to a mini-game that gives extra lives or a fire flower.
Unlike other Mario games that take place in the Kingdom of Mushrooms, Super Mario Land events occur in Sarasland and are drawn in linear art. Mario pursues Princess Daisy in her debut, not the standard Princess of the series in trouble, Princess Peach. When he jumped, the shells of Ko exploded after a short delay. Mario throws jumping balls, not fireballs (in the manual - "Superball"), 1UP mushrooms are depicted as hearts, and the level flagpoles are replaced by the platform task. Compared to Super Mario Bros., which contains 32 levels, divided into 8 worlds with 4 levels, Super Mario Land is smaller, with 12 levels, divided into 4 worlds with 3 levels. There are five unique bosses, one at the end of each of the four worlds, and the fifth and last boss is Tatanga, which appears when the fourth boss is defeated. The first three bosses can be destroyed by shells, or the player can transfer them to the exit without destroying them first;
The last level does not have a regular exit, and two bosses at the end of this level must be destroyed by shells to complete the level and the game. Some elements are repeated from previous Mario games, such as blocks hanging in the air, moving platforms that should be used to cross traps, pipes that lead to other areas, collector coins that provide extra life when 100 coins are collected, and Gumba mushrooms . After the player completes the game, they can again lose in a more complicated mode, in which the levels are the same, except for the enemies, more numerous; If the player completes a more complicated mode, the game allows the player to start a new game at any level in the game.
‹
›
Home
View web version