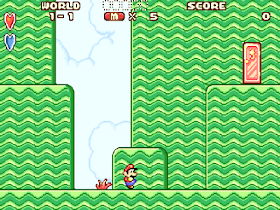 Genre: Action
Perspective: Side view
Gameplay: Arcade
Published by: Nintendo of America Inc.
Developed by: Nintendo R&D2
Released: 2001
Platform: Game Boy Advance (GBA)
Super Mario Advance, a famous hit for the Game Boy Advance, combines two classic Mario games.
Super Mario Bros. 2 is back in a unique, improved version for the GBA system with new features, improved graphics and sound. Arrange to escape from the mysterious land of Subcon, playing Mario, Luigi, Toad or Peach.
Unlike other games where Mario deals with enemies by jumping on them, this time Mario and his friends will have to pick up various objects and throw them at enemies. Even the enemies themselves can be used as missiles. Each character has individual strengths and weaknesses. For example, Princess Peach can soar the longest in the air. Conquer the seven worlds, each of which is filled to capacity with red coins.
Even when you pass all seven worlds, your tests will not end there. Your next goal will be Testing Yoshi. You have to find two yoshi eggs hidden on each level.
Also do not forget about the classic arcade game Mario Bros., where Mario and Luigi first met each other. In this dynamic platformer you have to clean the pipes from their inhospitable inhabitants.
‹
›
Home
View web version