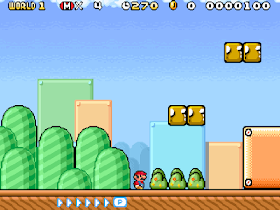 Genre: Action
Perspective: Side view
Gameplay: Platform
Visual: 2D scrolling
Published by: Nintendo of America Inc.
Developed by: Nintendo R&D2
Released: 2003
Platform: Game Boy Advance (GBA)
Wear a red or green Mario or Luigi jumpsuit and go on an adventure. Jump, jump, slide, fly and swim through eight giant levels. What is to be done by our heroes? Defeating the army of Bowser and his harmful henchmen who turned all the local kings into animals.
What makes the game Super Mario Advance 4: Super Mario Bros. 3 so special? Maybe precise control? Or a great level design filled with secrets and surprises? Or such amazing bonuses as a tanuki suit for flying, a frog suit for swimming or a special whistle calling for whirls?
Standing out with significantly improved visual and sound effects compared to the original game for the NES, as well as new special features, Super Mario Advance 4: Super Mario Bros. 3 will give you a chance to relive this classic game.
‹
›
Home
View web version