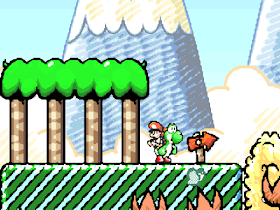 Genre: Action
Perspective: Side view
Gameplay: Arcade, Platform
Published by: Nintendo of America Inc.
Developed by: Nintendo R&D2
Released: 2002
Platform: Game Boy Advance (GBA)
A great arcade game about the childhood of all the famous Mario. The game begins at a time when the stork, carrying the baby Mario to his mother and father, is knocked down by an evil witch. But, fortunately, Mario discovers a community of dinosaurs Yoshi, which will help him escape from this witch. You will visit 6 worlds (9 levels in each world) and additional bonus rounds. Magnificent graphics and awesome music are waiting for you in this game.
‹
›
Home
View web version