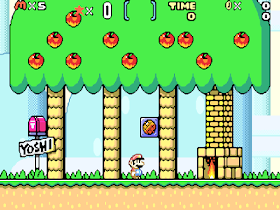 Genre: Action
Perspective: Side view
Gameplay: Platform, Puzzle elements
Published by: Nintendo of America Inc.
Developed by: Nintendo Co.
Released: 2002
Platform: Game Boy Advance (GBA)
Super Mario World: Super Mario Advance 2 is a perfectly recreated classic Super Mario World game for the Super Nintendo system. It includes all the secret exits and levels and gives you a lot of positive emotions.
Planning the perfect vacation for Mario and Luigi on Dinosaur Island is going awry when they learn that Princess Peach has been kidnapped by the sinister Bowser again. Our brave plumbers are going on a long journey to save their long-time girlfriend. On the way, they will have to deal with vile assistants of Bowser and solve the most difficult puzzles that they have ever come across.
Before the start of each level, players can choose whether they want to play Mario or Luigi. Mario is faster than his brother, but Luigi can soar longer in the air (a new feature in the Super Mario Advance version).
Collecting bonuses, both brothers can take advantage of amazing abilities. The mushroom will help Mario grow, the fire flower will allow him to throw fireballs, and taking a feather, Mario will receive a raincoat. A cloak can destroy enemies, and even with it you can soar, if before that you can accelerate better.
You can also carry armor and switches "P", which turn the blocks into coins and vice versa, which guarantees you a lot of fun and challenging puzzles. Another unusual feature in the game is riding a Yoshi. By the way, Yoshi’s first appearance took place in Super Mario World. This green dinosaur will definitely help Mario and Luigi, because he can swallow enemies, spew fireballs and carry special items.
Like all Mario games, Super Mario World is full of secrets. In addition to the hidden blocks and lianas, many levels of the game contain hidden exits that are not so easy to find. To go through all the levels of the game, you will need to find all these secret exits.
‹
›
Home
View web version