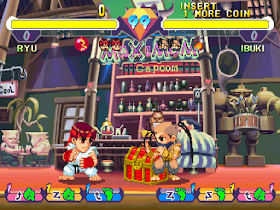 Genre: Action
Perspective: Side view
Gameplay: Fighting
Art: Anime / Manga
Published by: Capcom Co.
Developed by: Capcom Co.
Released: 1997
Platform: Arcade Machine
In addition to the standard battle, there are various gems (like SPFII Turbo stones) that a player can collect during matches to give energy to his character (based on the Red Earth), and there are elemental spheres that can be thrown at the opponent from different angles visually it looks like an elemental blow from the Darkstalkers). Elemental spheres affect the opponent in different ways: they are turned into stone, frozen, etc. Each character begins each match with one of the spheres; Tessa always starts with an ice sphere, Ryu starts with a lightning.
There are 2 main scales and 3 auxiliary scales in the interface. The two main scales are health and a super-scale; the second determines the ability to perform "powerful combos". The scale itself of a powerful combo can accumulate up to 9 charges. Each powerful combo has a level assigned to it that determines how many scales of a powerful combo it requires.
Each character has animated drain (or life) icons. During the battle, the emotions of the icon change between happy, sad and surprised (the latter occurs only when the character in the knockout or loses the round by the end of time). As a rule, at the beginning of a match all fighters have 3 stock icons.
Three auxiliary scales in the lower corners of the screen reflect the levels of three special character movements. Each character has at least 3 special movements, and each movement corresponds to a color. Some characters have one or two additional special movements, independent of auxiliary scales. Each time the attack reaches the opponent, a precious stone flies out of the opponent; this stone strengthens the corresponding special movement.
There are 4 buttons: a fist blow, a foot blow, a special button and a mockery. A special button is responsible for the charged movement, which can not be blocked, and which forces the opponent to throw out the precious stone. From the degree of charge of a special attack depends on how many stones the rival will throw. Holding down, forward, or not choosing directions at all by using a special button, the player determines the color of the dropping stone. Holding "back" by pressing a special button allows you to protect yourself from non-blocking special attacks. Other types of attacks during blocking do not cause damage, and, unlike most 2D fighting games, among them are special moves and powerful combos.
There are also "flash combos", or "costume combos": a player performs a combo by pressing a button of a fist or a leg kick after kicking an opponent 4 times. In a flash combo, most often, the character changes his suit (except for Ryu using accessories) and performs a powerful end attack. Among the costumes are uniforms such as road policemen and schoolgirls, swimsuits and even cosplay of other Capcom characters. So, Chan Lee turns into Jill from Resident Evil.
Teams are very easy to compare with the Street Fighter series, because there is a special button. Performing the movement and pressing a special button, the player performs a powerful combo.

Ryu: a universal character. Looking for Tessa, who may have a new test for him. In her end, she sends Ryu to fight with Hauser. However, Tessa understands that those who went to the battle with Hauser never returned alive. In the Ryu attacks, there are lightning elements.
Ken: the universal character. Looking for a beautiful woman to drink tea, after following his honeymoon, his relationship with his wife Eliza deteriorates. In his end, finds Morrigan and drinks tea with her, Eliza sees this and ruthlessly attacks Ken, to Morrigan's fun. Ken's attacks are built around the theme of fire.
Zangiff: power character. She is looking for Felicia to persuade her to arrange a concert in Russia. As a result, the concert becomes a hit.
Chiang Li: speed character. He looks for the missing animal of the zoo, mistakes Felicia for him. In her end, fearing a female cat, Chang Li learns about the disappearance of Felicia and goes to her search, not knowing that she has already caught her.
Ibuki: a skillful character. Looking for Sakura, who can know the location of the ice cream shop in Harajuku. In his end, the guy finds the Harajuku and causes him to fight, but refuses after offering baked potatoes. This is the only game character from SFIII, although there is also a cameo of other characters from this game.
Sakura: speed character. She is looking for her friend Ryu, who agreed to train her if she can defeat him. In the end fulfills his desire.

Morrigan: a skillful character. In her story, jealous of the beauty of Chiang Li and looking for her to demonstrate that it is Morrigan who is the most attractive and strongest woman. Morrigan believes that a victory over her will prove this. But soon after the victory, in its end, Morrigan learns that Lilith has seduced many men. Angry, Morrigan realizes that her quest is not finished.
Xian-ko (Lei-Lei in Japan): high-speed character. With his sister Mei-Lin (Lin-Lin in this game), he is looking for Zangif, who offers part-time work. The reason is simple: the sisters do not work and need money.
Felicia: high-speed character. Looking for Ken, who has connections at the film studio, I mean, can help in the realization of Felicia's artistic desires. At the end, Ken introduces her to Fei Long, and he gives Felicia a role in his last project. However, much to his dismay, Felicia must play the role of antagonist.

Tessa (Tabasa in Japan): a skilful character. Looking for a magic wand, which owns Xian-ko. When he receives a magical scepter in the end, he finds out that he belongs to the trading company of Anakaris, and so it turns into a penguin. This is the only game character from Red Earth, although the other characters are present in the form of a cameo: Leo sits on Tessa's chair in her den on one of the levels; in one of the super-movements, it can transform into a dragon similar to Hauser; Mei-Lin is used by her as a companion and human shield.

Dan: the universal character. Looks for students to open a new school. Sakura finds and sees in her the first student. Sakura leaves in 3 days and informs by letter that she has already mastered all that is needed, and that his movements look strange, in addition to being useless in combat. At the end of the letter, she calls him "loser", from which Dan begins to shed tears.
Akuma (Gouki in Japan): power character, secret boss. He is looking for a new place to train his skills, because his island has turned into an amusement park. Xian Ko takes him to an abandoned cemetery in the midst of a lush forest, and reports that there are zombies that can practice there at night.
‹
›
Home
View web version