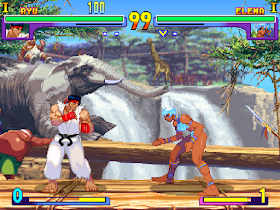 Genre: Action
Perspective: Side view
Gameplay: Fighting
Visual: 2D scrolling
Art: Anime / Manga
Published by: Capcom Co.
Developed by: Capcom Co.
Released: 1997
Platform: Arcade Machine
At its core, the game operates on the same fundamental rules as its predecessor, Street Fighter II and Street Fighter Alpha. After selecting one of the available characters, the player is invited to defeat the opponent (computer or other player) in a fight consisting of an odd number of rounds, for a certain time. Against the opponent you can use blows of different power, throws and combinations of strokes (combo), performed by joystick movements and pressing the control buttons. The victory in the match is awarded to the player who won such a match in most rounds. In the event that both fighters knocked out each other, or at the end of the allotted time they had an equal amount of health, they were counted as a double knockout or a draw; in the event that this was the case during the final round, the newly introduced Judgment system is activated, by which the winner is randomly selected by three judge-girls (called Judgment Girls), by simple majority method.
The combat system of the game as a whole develops the concepts typical of Super Street Fighter II Turbo; respectively, the capabilities of the air block and counter-attack from the block, which were available in Alpha, are not available in Street Fighter III (however, players can still use the opportunity to quickly get up when they fall to the ground, as was possible in Alpha); Nevertheless, new functions were introduced instead. Characters start the fight with the same amount of health, but differ in sensitivity to attacks. Six buttons are responsible for the main attacks: three buttons for punches and three for kicks, respectively, differing in succession in strength and speed of application: light, medium and strong. All characters are capable of performing throws; all have the opportunity to make an opponent swipe by pressing a strong kick button in the sitting position. Blocking of punches in the game is carried out by simple retreat. The main methods of movement, in addition to standard walking and jumping, in a highly modified form were added from the series Darkstalkers and crossovers the possibility of jerks forward and back (Dash) and high jump (High Jump). In some characters, certain techniques have the property, upon impact, to unfold the opponent's character with his back to the player's character, so that the attacker has to recover longer from this kind of attack, which gives the attacker additional time and opportunities for combining attacks.
One of the innovations that appeared in Street Fighter III was the so-called Leap Attack, carried out by double-clicking the "down" direction on the gamepad and any attack button (in 3rd Strike - pressing a combination of medium strokes ) and effective against a seated opponent. In addition, the game introduced a scale of stunning, located under the scale of health and filling up as the strikes of players, and the characters of its size may vary; accordingly, the speed of character insertion into the Dizzy state is different, which is achieved when the scale is filled.
Also, the notion of super receptions, which in Street Fighter III is called Super Art (lit. "superior fighting style", firing super art, the energy scale, respectively, is called the Super Art scale) was also processed. When choosing a character, the player will be asked to choose one of the three super-receptions specific to each character for further use in combat. As in previous games, the energy scale is filled when carrying out various kinds of attacks. The player gets the opportunity to use super-reception only after filling the scale; depending on the chosen super reception, can differ: the amount of energy required to fill the energy scale; the number of grades allocated for energy storage for super receptions, and hence the number of possible uses of super reception, provided that the scale is fully filled. Accordingly, the energy scale can be displayed differently on the HUD. Also, the player can cancel the animation of the special reception in super reception, which greatly facilitates their use in the combo, although as a result the resulting attack will not be so powerful as it is with direct use. Accordingly, to facilitate the possibility of performing such attacks, most of the teams for super receptions have been simplified.
The main novelty of the game was the introduction of the concept of parrying (blocking in the Japanese version) - the ability to reject the attack without causing damage. For a certain time before striking, the player needs to press the direction of the joystick forward to the opponent or down (if the player receives a blow that needs to be blocked sitting) for parrying. Rejected with a successful parry attack will not inflict damage on the character, allowing the player to seize the moment for a retaliatory attack. Moreover, in this way the player can defend himself against attacks involving more attacks, including special and super-tricks, without getting any damage, as is the case with a normal block. However, this method requires the player to clearly determine the moment of attack.

Being developed (as well as its updates) for the system CP System III, Street Fighter III possessed more advanced 2D graphics in comparison with the previous parts. A total of 700 to 1200 hand-drawn animation frames were created for each character, including several different animations in the attack, as well as completely new animations for positioning the back to the enemy when applying the appropriate attacks (see above) and when knocking out with weak hand shots and foot.
‹
›
Home
View web version