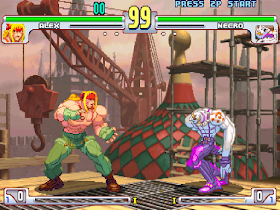 Genre: Action
Perspective: 3rd-person, Side view
Gameplay: Arcade, Fighting
Art: Anime / Manga
Published by: Capcom Co.
Developed by: Capcom Co.
Released: 1999
Platform: Arcade Machine
3rd Strike - the second and last among the updated versions of Street Fighter III, following Street Fighter III: 2nd Impact; as in the previous game, it further expanded the composition of game characters, which included 5 more characters; additional improvements in game mechanics were introduced.
The structure of the 3rd Strike combat system is basically the same as that used earlier in the previous iterations of Street Fighter III, but some aspects were revised to a certain extent. Teams were changed to perform parrying in the air, attacks from a swoop (Leap Attacks, they are universal overheads) and throws (captures). Parry mechanics were added with the possibility of a so-called parry from the unit (Guard Parry), which can be activated by entering a command for parrying at the time of blocking at least the first blow to the combo; the successful use of the technique by the player is marked by a characteristic fiery red color, with which the sprite of the character flashes (hence the other name of this mechanic is Red Parry).
Another innovation is the evaluation system of the player's performance after the battle (single or with another player) according to four criteria: Offence, Defensive, Tech and Extra; If certain conditions are met, the player may be credited with Special Points. After taking into account the above criteria, the player receives a final rating, ranging from the lowest E to the highest MSF (Master Street Fighter).
The single pass mode consists of ten levels, on eight of which the player must choose one of the two characters that will be fought. After the third and sixth fights, the player passes two bonus levels: the updated versions of the mini games Crush the Car and Parry the Ball, returned from Street Fighter II and Street Fighter III: 2nd Impact respectively. On the penultimate battle in the passage, the player meets the story opponent of a character (example: Ken for Ryu, Urien for Ken and Chun Li, and so on), a battle with which the dialogue between characters can precede; the final opponent for all the characters is Jill (for Alex himself is Alex). Under certain conditions, a player can meet Q as a secret opponent (although the Q itself is also available for selection by the player).
The list of characters Street Fighter III: 3rd Strike includes all playable characters from 2nd Impact and 5 added characters; thus the total number is 20, and all of them (including Akuma, in the 2nd Impact former secret character) are available from the very beginning for the game.
All returned characters received completely new arenas (some of which are common to two fighters) and endings for the single pass mode; Also, all returned characters received new musical themes or remixed versions of previously available ones; with the exception of Akuma and Ibuki, all returned characters also received new voice actors.
‹
›
Home
View web version