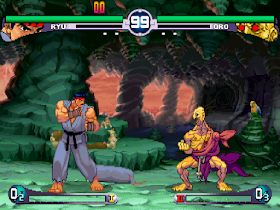 Genre: Action
Perspective: Side view
Gameplay: Fighting
Visual: 2D scrolling
Interface: Direct Control
Published by: Capcom Co.
Developed by: Capcom Co.
Released: 1997
Platform: Arcade Machine
The structure of the combat system in the 2nd Impact is similar to that used in the original Street Fighter III. All the specific mechanics introduced in the latter were stored in its second iteration. Compared with the original game changes in the 2nd Impact, the frame-date was subjected; some returned characters received new techniques; Animations for already existing techniques were improved.
In the 2nd Impact, the system of using the energy scale has also changed; The amount of energy stored in the latter, depending on the chosen Super (Super Art), is changed individually for each of the game characters. In addition to the above-mentioned Super Art, the game introduces the concept of EX-special techniques added from the Darkstalkers series - improved (in terms of damage and practical properties) versions of standard special techniques. By spending a certain amount of energy in the Super Art scale, previously scored to the required level (signaled by a characteristic glow), the player can activate this type of attack by pressing two attack buttons instead of one.
Among the new features introduced in the 2nd Impact, also include the technical throw function, allowing one of the players to avoid a throw from the other, and the so-called personal action (English Personal Action) - unique for each character animation, close in properties to those present in previous games of the series ridicule, but in addition to the main function of the latter - to mock the enemy - giving also a certain advantage with successful use (increase in damage, speed of recovery of the scale is stunned and the like).
The mode of single-player game is slightly changed in comparison with the previous game. The player conducts battles with eight computer opponents in turn with the boss as the final opponent. Under certain conditions, the player can also meet a secret opponent who may appear before a battle with one of the main opponents and offer the player to fight with him, which is accompanied by a corresponding dialogue. Similarly, a player can get an opportunity to fight with Akuma at the end of a single pass; from the success achieved in the battle with the Akum, the possibility of fighting against the "true" form of the Akuma also depends.
In 2nd Impact, the notion of bonus mini-games, which was last introduced in Super Street Fighter II, was returned. At the end of the third match in the course of a single pass, the player will participate in a mini-game called "Parry the Ball" (during which the player (with the help of Sean under the control of the computer) practices parrying skills, beating off basketballs.
The character composition in 2nd Impact includes all playable characters from the original Street Fighter III and 2 added; Jan, who previously had a set of receptions common with his brother, now received his own special and super receptions. In addition, Akuma returned to the game, which appears as a secret opponent during a single pass, but is also available for play by special manipulations both directly in the game and in the settings of the arcade machine. Thus, the total number of game characters in the 2nd Impact reaches 14.
‹
›
Home
View web version