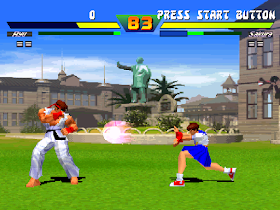 Genre: Action
Perspective: 3rd-person
Gameplay: Fighting
Published by: Capcom Entertainment
Developed by: Arika Co.
Released: 1997
Platform: PlayStation (PSX, PS1)
Long ago, in a distant galaxy, all fighting games were 2D, and the characters did not consist of hundreds or thousands of polygons, but were simply drawn and just as simply animated. That was the realm of Mortal Kombat and Street Fighter, and it was then distributed to all existing platforms, computers and consoles, and these gamess were good and interesting. Now, already in our galaxy, no one less than about three dimensions, and does not want to talk, so it was necessary for all gamess to adjust to these dimensions. The series Street Fighter from Capcom was one of the last ones that moved from 2D to 3D. Capcom has long been "picking up" the frenzied Street Fighter and is constantly releasing some kind of sequels, additions, even Tetris has managed to make a Super Fight Fighter II X / Turbo out of the classic fighting game, but here's a full-length sequel to finally get the "3 "to pass in a series, could not be released. And so I decided ...
The impressive name Street Fighter EX Plus Alpha is a brand new 3D fighting game in the best traditions of the series, but this time with the graphic magnificence of Virtua Fighter and Tekken. When transferring characters from the old series of games, the authors tried to preserve all their individuality, and so they almost lost nothing, but they acquired a lot. The characters in the game are already twenty-three pieces together with four additional ones on a high level of difficulty. As usual, in Street Fighter in battles are widely used complex multistage combs, which now can be even more combined with special attacks, and also create with their help whole complexes of blows. Unfortunately, when creating the game Capcom, most likely, too cautious, and therefore nothing fundamentally new compared to the modern second and third generation of 3D fighting games you will not find. Characters, fighting in the 3D world, absolutely devoid of the most 3D movement, and this despite the fact that even in not too good War Gods this movement is possible. Graphically, the game, of course, leaves a pleasant impression, but again there is nothing new. In general, the game is a good start for the 3D series Street Fighter, provided not so obvious copying from popular fighting games and the presence of serious innovations in the gameplay, as the Street Fighter has already gradually started to forget, and something really fresh is needed to inject old name new shine.
‹
›
Home
View web version