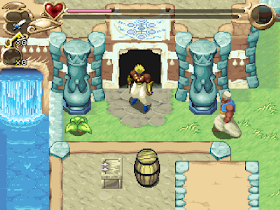 Genre: Action, Role-Playing (RPG)
Perspective: 3rd-person, Top-down
Published by: SEGA of America
Developed by: Ancient Co.
Released: 1996
Platform: SEGA Saturn
The game takes place in real time. Each weapon comes with a set of special attacks that are performed in a fighting style. The player can also summon spirits by shooting a magic sphere from the Golden Bracer to an object, the element of the summoned spirit depends on the object of the collision. Spirits can fight with enemies, heal Leon, or help him solve puzzles. Leon can own a variety of weapons, but the main difference from the first part is the absence of breakage. Also in the game there is a mode for two players, which can be turned on with the cheat code. Graphics, for the most part, are identical to the original. The only notable improvements in colors and frame rates. The graphics in the prequel have a sharper contrast and saturation, the overall performance is higher.

Many years before the events in the original Beyond Oasis, the warrior Ordan gives his young disciple Leon the Golden Bracer, explaining that he is the heir of the Spirits King of the Oasis. Now he needs to receive the help of six element spirits: Ditto (spirit of water), Ifrith (spirit of fire), Bava (spirit of the earth), Brass (spirit sound), Shade (spirit of darkness), and Airl (spirit of air). The antagonist is the wicked wizard Agito, who has the Silver Bracer - which threatens to destroy the world.

Leon is a young disciple of Ordan and heir to the King of Spirits of the Oasis; He is given the Golden Bracer, which gives him the ability to summon six spirits and allows them to use their spontaneous abilities.
Ordan is a teacher of Leon, gives him the Golden Bracer.
Mira is a painful woman who sailed to the Oasis. Persecuted by monsters Agito.
Agito is the main antagonist, owns the Silver Bracer, an analog of the Golden Bracer, and intends to destroy the Oasis. With his red-embroidered armlet, Agito is able to create chaos and destruction.
‹
›
Home
View web version