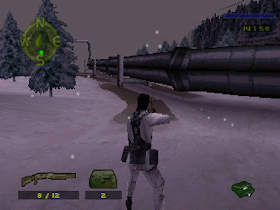 Genre: Action
Perspective: 3rd-person
Gameplay: Shooter
Narrative: Spy / Espionage
Published by: Take-Two Interactive Software
Developed by: Runecraft
Released: 2001
Platform: PlayStation (PSX, PS1)
Spec Ops: Ranger Elite - the continuation of the famous series of popular military shooters.
You again have to take part in combat operations as a soldier of an elite detachment of the special forces of the United States and go through a fascinating series of realistic missions of this intense militant.
Choose a team of soldiers, but be careful, because now each of them has a unique set of skills, so that some couples will work better than others.
Your task in the game is to competently manage a team of fighters and destroy enemy targets and opponents in the face of terrorists, smugglers and other bad guys, while clearly performing combat missions of the command.
You are waiting for exciting missions that simulate the real conditions of what is happening, as well as a fairly well-designed graphics, conveying the whole realism of gameplay.
‹
›
Home
View web version