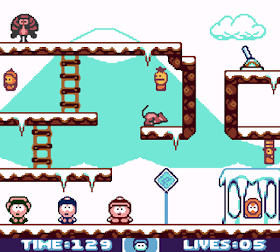 Genre: Action
Gameplay: Platform
Published by: Club Acclaim
Developed by: Crawfish Interactive
Released: 1999
Platform: Game Boy Color (GBC)
A comet is seen, which is directed to the South Park. Cartman, Stan, Kyle and Kenny must overcome many evil characters and stop her before she destroys the city. Among the obstacles - turkey mutants, cows-killers, aliens, giant clones, animated toys, robots; the only help to the boys are the different types of weapons and the Chief, who gives them advice.
‹
›
Home
View web version