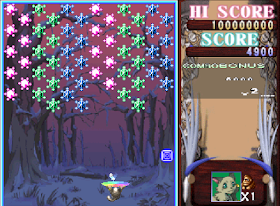 Genre: Action
Perspective: 3rd-person
Gameplay: Paddle / Pong
Published by: XS Games Ltd.
Developed by: Four Winds Inc.
Released: 2002
Platform: PlayStation (PSX, PS1)
You play as Prism and Rhythm, that's the name of a cat and a fairy, the main characters of the game, who intend to save seven captured by the Guardians of the Earth. The player controls the tail of the swinging kitten to hit the balls and smash the gems along the top of the playing field. Here are ten worlds with ten levels in each with a different background like sky, sea, river, forest and castles. At the end of the level you are waiting for the Boss. Arkanoid would not be an arkanoid if it did not include various bonuses for broken designs, there are a lot of them and they are typical for this puzzle. When you save all the Guardians, you will unlock the final stage with the Lock.

Use Continuation in the first seven steps.

Do not use Continue on the first seven stages of the game.
Note: Sorcerer's Maze, which was released in the USA and Europe, does not have these conditions and you will play all the normal and additional stages, but you can only get one final. In Prism Land Story, which was released in Japan, as well as in Europe, you can open both endings.
‹
›
Home
View web version