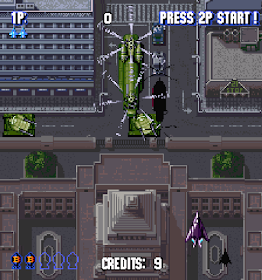 Genre: Action
Perspective: Top-down
Gameplay: Arcade, Shooter
Vehicular: Flight / Aviation
Published by: MediaQuest
Developed by: Video System Co.
Released: 1996
Platform: PlayStation (PSX, PS1)
Whoever played the previous games will notice that the shots and special attacks of some airplanes have been modified.
There are 7 teams 14 pilots and 26 aircraft in this game each team consists of two members and the choice of two aircraft per player except the secret airplanes that have only one aircraft each.
Choosing one of the aircraft the second player can only play with the plane of the same team it is not possible to combine the teams.
A secret pilot's plane is unlocked by finishing the game with him at the end. Note that next to the aircraft is a medal.
NATO teams are unlocked when secret US, Japan, Russia, Sweden and PKF teams are obtained, and by getting the airs of all these teams the characters "kotomi" and "the man" appear outside the selection screen below the teams NATO the two pilots ships of previous games of the videosystem that are turbo force and rabio lepus.
There are 17 stages in this game but the player goes through only nine of them completing the first stage 3 of 5 stages are chosen randomly finishing stages 5 and 7 the game asks you which way to follow the choices will define the final phase of the game once choosing the aircraft secret of the pilots also emerge modified stages different from the aero fighters 1,2 and 3 when destroying the last boss the game does not return to the beginning it is necessary to select the secret airplane of the pilot to play the modified phases.
In the arcade the name of the game is sonic wings limited and it does not have all the airplanes of the homemade versions, it does not have alternative stages and not even the secret airplanes we can consider that special edition is an expansion of the same.
‹
›
Home
View web version