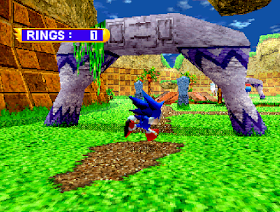 Genre: Action, Compilation
Perspective: Behind view, Side view
Gameplay: Platform
Visual: 2D scrolling
Art: Anime / Manga
Published by: SEGA of America
Developed by: Sonic Team
Released: 1997
Platform: SEGA Saturn
The reason for the compilation was numerous appeals from fans of the series to the company Sonic Team. The team had difficulty in collecting all the information, because they did not even know about the release of other games on other consoles from Sega. Specially for Sonic Jam, the level of "Sonic World" created in 3D graphics was created. The development lasted almost a year.
The output of Sonic Jam was ambiguously met by critics. To the merits of the project the reviewers included the level of "Sonic World", as well as the very opportunity to study the history of the Sonic the Hedgehog series. As shortcomings, observers called the absence in the collection of the game Sonic the Hedgehog CD and full-fledged 3D graphics.

The collection contains several games of the Sonic the Hedgehog series, previously released on Mega Drive / Genesis; There are also additions to Sonic & Knuckles. In Sonic Jam there are three modes - original, normal and easy. In the first mode, the game is no different from the original, but in the last two, some levels are removed, replaced by one long act, and the passage of the Special Stage is facilitated. In the game Sonic the Hedgehog, the hedgehog Sonic had a spin dash reception, allowing to accelerate in place, and which can be turned off in the menu. Also in the games were fixed defects, slightly changed the sound effects and melodies.
In addition to the old games, in the collection menu you can select the 3D level "Sonic World", reminiscent of "Green Hill" from Sonic the Hedgehog. The player can perform eight different missions, for example, collect a certain number of rings or find checkpoints. At the level there are no robots of Dr. Robotnik. In addition, there are museums where you can watch videos from the old games of the series, listen to music and see pictures.

In 1997, Sega at the Tokyo Game Show [en], as part of its plan called Project Sonic, announced the creation of several games about Sonic on Sega Saturn. The goal of the strategy was to attract new players to the Sonic the Hedgehog series. Specifically for this, games such as the Sonic Jam compilation, the Sonic 3D platformer and the Sonic R platform were developed. In an interview, the creators of the Yuji Naka and Naoto Oshima series stated that the reason for the compilation was numerous appeals from fans who asked the Sonic Team to tell more about the origin of Sonic .
Develop Sonic Jam began after the release of Nights into Dreams ..., in July 1996 [6]. Sonic Team decided to include a few games on Mega Drive / Genesis: Sonic the Hedgehog, Sonic the Hedgehog 2, Sonic the Hedgehog 3 and Sonic & Knuckles (along with the additions Blue Sphere, Sonic 2 & Knuckles and Sonic 3 & Knuckles). Specially for the collection was created the level of "Sonic World", executed entirely in 3D graphics. Through it you can learn the history of the Sonic the Hedgehog series from 1991 to 1997. Nevertheless, the team was having difficulty collecting information, because they did not even know about the release of other games on the Sega Master System, Sega Game Gear and Sega Pico.
The release of Sonic Jam took place at Sega Saturn in the summer of 1997. The following year, Tiger Electronics released a project for its Game.com console. This version is made in the form of a platformer, and is similar to the previous parts of the series. It contains the games Sonic the Hedgehog 2, Sonic the Hedgehog 3 and Sonic & Knuckles in the modified version. This version received extremely negative reviews from critics who abused low speed, poor graphics and control.
‹
›
Home
View web version