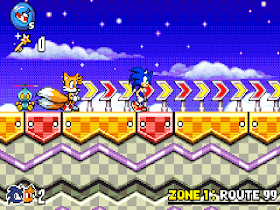 Genre: Action
Perspective: Side view
Gameplay: Metroidvania, Platform
Visual: 2D scrolling
Published by: THQ Inc.
Developed by: Dimps Corporation, SONICTEAM
Released: 2004
Platform: Game Boy Advance (GBA)
Sonic Advance 3 is a genre platformer, executed in 2D graphics. Shortly before the events of the story, Dr. Eggman builds a robot using the details of Emerl - a robotic gizoid, destroyed in the final of the game Sonic Battle. The new robot gets the name Gemerl. He can copy rival attacks and unite with different mechanisms. After the construction of the robot, the scientist with the help of the reception "Chaos Control" splits into several parts a planet similar to the Earth. The main characters - hedgehog Sonic and fox Tails - go on an adventure in order to find their friends (echidna Knuckles, hedgehog Amy Rose, rabbit Crim) and prevent Eggman from capturing the whole world.
The player has to pass eight or nine levels (depending on the scenarios), called zones (Route 99, Sunset Hill, Ocean Base, Toy Kingdom, Twinkle Snow, Cyber Track, Chaos Angel "," Altar Emerald "and" Nonaggression "), each of which is divided into three acts and filled with various enemy robots - Badnik. To get to the level, the hero must jump into the ring with the star in the open game world of "Sonic Factory". A player's character can attack enemies either by folding into a ball in a jump, or by using a spin dash (except for Amy, she lacks this ability), dispersing in place and attacking with a high-speed blow in the roll. During the passage of the level, the player collects gold rings that serve as protection against enemies (and additional rings can be obtained after the destruction of the badminton), and when collecting 100 pieces, giving an extra life. If the character is dealt damage, he will lose all the rings, and without them, with a second attack, he may die. In this case, the passage of the game begins either anew or from a control point. Dropped after receiving damage, the ring can be collected, but only for a limited time and no more than 20 pieces. In addition, the zones are scattered numerous bonuses stored in special capsules - for example, extra life, temporary invulnerability or acceleration. The passage of each act is limited to ten minutes; Depending on the time spent at the end of the act, the player is awarded bonus points. To complete the passage on the first two acts, it is necessary to touch a small ring with a star; in the third act is a battle with the boss - by Eggman himself, or Gemerl on the "Altar Emerald". In addition to the main game, Sonic Advance 3 offers three additional modes. The first is a multiplayer game, which can be played by the four of us; In this mode, the following missions are available: Find Chao and Team Rac. "Time Attack" offers the player to pass any level in minimum time, and "Sound Test" - to listen to music from the game.
The main difference from the series of games Sonic Advance was that now the levels are two characters, one of which is controlled by the player, and the other - a computer or, in multiplayer, the second player. Initially, only the hedgehog Sonic and fox Tails are available, and as the story progresses, echidna Knuckles, hedgehog Amy Rose and the rabbit Crim are unlocked. Each character has its own characteristics. Sonic is able to perform a flip (skid attack), destroying enemies on his way undercover, and attacking the nearest enemy in a homing attack (homing attack). The main ability of the Tails is the ability to fly - thanks to the fact that it has two tails and rotates them like propellers. Knuckles can soar in the air and, thanks to his crustacean gloves, attack the enemy in the air; also echidna knows how to climb walls and break obstacles. Krim, like Tails, can fly using his big ears like wings, and can throw his friend Chao Chao into an attack on opponents. Amy uses his giant hammer "Piko-Piko Hammer" to attack opponents and rebound. Despite the different features, all the characters in the second part have a common ability to tag action, thanks to which the character of the player interacts with his partner. Together, two heroes can overcome various obstacles, for example, fly a high wall, or perform a combo-reception.

Sonic passes the "Special Stage". All the special levels of the hero takes place only on the plane "Tornado"
In Sonic Advance 3 there are Special Stage - special levels designed to collect Chaos Emeralds. There are seven of these levels, and to get to each of them, the player needs to get a key, with which you can unlock the special spring located in the "Sonic Factory". To open the castle characters need to find on each act ten pets. All found pets appear in the chaos-garden, but they can not be controlled. The stages are scrollers in 3D graphics, where a character flying on a Tornado plane needs to collect a certain number of rings and beware of bombs, in collision with which a part of the dialed rings is lost.
In the case of a successful passage, the character receives the Chaos Emerald and additional points for the collected rings. If the player has collected all seven stones, the last level of "Nonaggression" opens, where the hedgehog Sonic in his super form, along with Dr. Eggman, are fighting against Gemerl. The stay of the hedgehog in this form is limited by the number of rings available to it, which decreases every second. After the victory, Tails repairs the robot and gives it to Krim - the baby of Vanilla's rabbit. If Sonic did not manage to collect all seven Emeralds, then after passing through the "Altar Emerald" zone, Eggman and Gemerl flee from the main hero, and the world - is restored after the split. The game ends with getting a photo from the robot-chao Omochao with all the characters from the game. For the remaining characters collection of Emeralds does not affect anything and their entire story line ends at the level of "Altar Emerald".

Apart from the re-release of Sonic the Hedgehog Genesis, it became one of the last games of the series released for this console from Nintendo. Designers and programmers Sonic Advance and Sonic Advance 2 took an active part in creating the continuation. The development process was led by designer and scriptwriter Akinori Nishiyama, and the production of the then head of the Sonic Team Yuji Naka, the head of the development department of the company Sega Toshihiro Nagosi and Dimps employee Koichi Sakita. Responsible for the level design were Kazuhiko Yamamoto, Yuko Yamanoe and Etsuko Hosokawa. The leading programmers were Tatsuaki Nakashima, Hiroki Yoshitake and Kuninori Dono, Yuji Uekawa as the artist.
The development team decided to introduce some changes into the game process: special stages have been reworked, the speed of passage has been increased, and small open worlds of "Sonic Factory" have been created for access to the zones and "Special Stage". However, the biggest innovation in the gameplay was the study of the levels at the same time by two characters. A similar gameplay is present in Sonic Heroes, where the player controls a team of three heroes. The musical accompaniment was created by composers Tatsuyuki Maeda, Kenichi Tokoy, Hideaki Kobayashi, Masaru Setsumara, Fumie Kumathani and Tomoy Otani. Many of the songs in the game are remixes that sounded in other parts of the Sonic the Hedgehog franchise. Although the album with the tracks of Sonic Advance 3 was not released, however the track "Route 99", which is the accompaniment for the same level, was included in the album "History Of Sonic Music 20th Anniversary Edition", published on December 7, 2011.
The project was announced on September 11, 2003. At the Electronic Entertainment Expo (E3) 2004, a small trailer was shown showing the principles of the team game. Sonic Advance 3 was released for GBA around the world in the summer of 2004 with the support of THQ. Like Sonic Advance 2, the third part was not ported to multiple platforms and was not included in any collection, except for a reissue in the Virtual Console service for the Wii U console in May 2016.
‹
›
Home
View web version