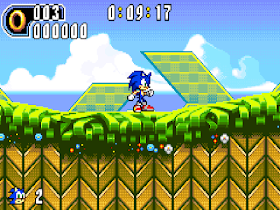 Genre: Action
Perspective: Side view
Gameplay: Arcade, Platform
Visual: 2D scrolling
Published by: SEGA Corporation, THQ Inc.
Developed by: Dimps Corporation, Sonic Team
Released: 2003
Platform: Game Boy Advance (GBA)
The game is the continuation of the first Sonic Advance. The gameplay of the sequel has not undergone any drastic changes: from the player everything is also required to go through several levels, along the way destroying the bad guys and collecting gold rings. According to the story, Dr. Eggman abducts the animals and friends of the Sonic the hedgehog. The protagonist goes on an adventure to save his friends, and stop the villain who wants to capture the whole world.
Development of the sequel began in February 2002 by the forces of the Dimps and Sonic Team studios. During the development of the platformer has changed in terms of design levels and some game elements. After the release of Sonic Advance 2 received positive feedback from the press and was commercially successful. Of the merits of the game, observers called the gameplay, graphics and animation of the characters, but they criticized the high level of complexity. In June 2004, the continuation of Sonic Advance 3 took place.
According to the story, Dr. Eggman collects all the animals from the forest and uses them to build his robots. The villain also kidnapped the rabbit Krim, the fox Tails and the echidna Knuckles. The blue hedgehog goes on an adventure to save his friends and stop the scientist.
The sequel gameplay is identical to its predecessor: the player has to go through eight or nine levels (depending on the scenarios) called zones (Leaf Forest, Hot Crater, Music Plant, Ice Paradise, Sky Canyon, Techno Base "," Egg Utopia "," XX "and" True Area 53 "), each of which is divided into three acts and filled with various enemy robots - Badnik. The character of the player can attack the enemies by folding into a ball in a jump, or by using a spin dash (except for Amy, she lacks this ability), dispersing in place and attacking with a high-speed blow in the roll. During the passage of the level, the player collects gold rings that serve as protection from enemies, and when collected 100 pieces give extra life. If the character is dealt damage, he will lose all the rings, and without them, if he collides with the enemy again, he may die. In this case, the passage of the game begins either anew or from a control point. Dropped after receiving damage, the ring can be collected, but only for a limited time and no more than 20 pieces. In addition, zones are also scattered numerous bonuses, stored in special capsules - for example, extra life or temporary invulnerability. The passage of each act is limited to ten minutes; Depending on the time spent at the end of the act, the player is awarded bonus points. To complete the passage on the first two acts, it is necessary to touch the tablet with the image of the Eggman; in the third act is a battle with the boss - by Eggman himself, or Knuckles on "Sky Canyon". In addition to the main game, Sonic Advance 2 has three additional modes. The first is a multiplayer game, which can be played by the four of us; In this mode, the following missions are available: collect the rings ("Collect the Rings") and race ("Race"). For multiplayer you need to connect the portable set-top boxes with a special cable. "Time Attack" offers the player to pass any level in minimum time, and "Sound Test" - to listen to music from the game.
Sonic Advance 2 can go through five different characters - for Sonic, Tails, Knuckles, Crim and Amy - pre-selecting a certain character on the menu. Initially, the player is only available Sonic, the other characters become available after meeting with them on the levels, and Amy - after passing all the storylines for the other characters. Each protagonist has his own characteristics. Sonic is able to make a spin attack in the jump, increasing the radius of attack to defeat the enemy and without touching it, and attack the nearest opponent in a homing attack. The main ability of the Tails is the ability to fly - thanks to the fact that it has two tails and rotates them like propellers. Knuckles can soar in the air and, thanks to his crustacean gloves, attack the enemy in the air; also echidna knows how to climb walls and break obstacles. Krim, like the Tails, can fly using his big ears like wings, and can throw his friend Chao Chao into an attack on his opponents. Jerzy Amy Rose uses his giant hammer "Piko-Piko Hammer" to attack opponents and rebound. Despite the various features, all the characters in the second part have a common new ability - acceleration (boost). The reception is activated automatically at the moment when the hero runs at the maximum speed for a long time without stopping. Thanks to the new ability, the character can run through the surface of the water or destroy the enemy with a powerful attack.

Echidna Knuckles on the "Special Stage". In front of the robot "Zero", which you need to watch out for, not to lose the collected rings
As in the predecessor, in the sequel there are special stages ("Special Stage") - special levels designed to collect Chaos Emeralds. There are seven of these levels, and to get to each of them, the player needs to collect seven special rings scattered on each act. Having collected all the special rings and passing the act, the character gets into the "Special Stage". The stages are scrollers in 3D graphics, where the player needs to collect in two minutes 300 rings. At the location there are various items that can facilitate the passage of the level (for example, springs or acceleration). "Special Stage" is guarded by a giant robot "Zero" from Sonic Adventure, which pursues the character and tries to attack the main character. However, the enemy can be defused with the help of a spin attack.
In the case of a successful passage, the character receives the Chaos Emerald and additional points for the collected rings. If the player has collected all seven stones, then opens the chaos-garden and the level of "True Area 53", and in the last hedgehog Sonic in his super form fights with Eggman in space. The character's stay in this form is limited by the number of rings he has, which decreases every second. After the victory over the villain, the blue hedgehog frees Crim, the rabbit Vanilla, from the captivity. If Sonic failed to collect all seven Emeralds, then after passing through the zone "XX" he falls from space to "Leaf Forest", where he is met by small animals. For the remaining characters collection of Emeralds does not affect anything and their entire storyline ends at the level of "XX".

In addition to the main game, Sonic Advance 2 features Tiny Chao Garden, where small virtual pets of chao live. The level becomes available to the player only after collecting seven Emeralds of Chaos at the "Special Stage". In the sequel, the Chao-garden is practically no different from what was in Sonic Advance: the action takes place in a small garden in which trees grow and a pond is located. The animal can be fed or entertained with the help of toys purchased in a special store. Like some animals, chao begin life cycle with eggs. They can be stored in the garden if the player does not have a single pet. Using the special GCN-GBA cable, the player can move his chao from Sonic Adventure DX: Director's Cut and Sonic Adventure 2 Battle to the GameCube console in Sonic Advance 2 on Game Boy Advance.
In "Tiny Chao Garden" there are two mini-games: maps and collection of rings. In the first game, you need to find two matching cards in the deck, and in the second - to help Krim and Chisu collect gold rings.

The first ideas about the sequel to Sonic Advance appeared at the company's employees in late 2001, and full-fledged development began in February of the following year. In total about ten people took part in creating the game. The development process was led by designer and scriptwriter Akinori Nishiyama, and the project was then produced by the then head of Sonic Team, Yuji Naka and founder of Dimps Hiroshi Matsumoto. Kazuo Ito and Makoto Yonazu answered the level design. The leading programmers were Yoshihisa Hashimoto, Takaaki Saito and Takahiro Hamano, Yuji Uekawa and Sachiko Kawamura as artists.
The video game runs on the reworked Sonic Advance engine. The development team decided to make some changes to the game process: a new boost was introduced, the number of receptions for characters increased, the number of acts increased from two to three, and boss battles were altered. According to Yuji Naki, all of the above changes were needed in order for players to feel great speed and shift their passing of the levels towards the strategy. Compared with the first part, the number of characters in the sequel increased from four to five. In this game for the first time appears rabbit Crim, although her debut was originally planned in Sonic Heroes. However, the Sonic Team decided to introduce the heroine to Sonic Advance 2 in order for the players to learn more about her character. Musical accompaniment was created by composers Yutaka Minobe, Tatsuyuki Maeda and Teruhika Nakagawa. Despite the fact that the album with the tracks of Sonic Advance 2 was not released, the track "Leaf Forest", which is the accompaniment for the same level, was included in the album "History Of Sonic Music 20th Anniversary Edition", published on December 7,
The game was announced on July 1, 2002. For a limited time, at the Tokyo Game Show (TGS) and World Hobby Fair, players could pass a demo version. In it, the level of "Leaf Forest" was available. As in the case of Sonic Advance, the representatives of Sonic Team again announced on TGS the possibilities to transfer data from Sonic Advance 2 to Sonic Adventure 2 Battle and Sonic Adventure DX: Director's Cut using the special cable "GCN-GBA". Platform for GBA was released in Japan in mid-December 2002. In the rest of the world, the release took place in March 2003 with the support of THQ. Since that year, Prima Games has distributed books, which contained guidance and additional information on the game. Unlike its predecessor, the sequel was not ported to multiple platforms and was not included in any collection, except for a reissue in the Virtual Console service for the Wii U console in February 2016.
‹
›
Home
View web version