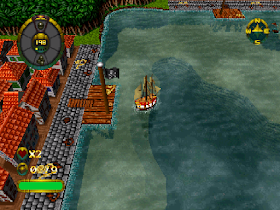 Genre: Action, Puzzle
Perspective: Bird's-eye view
Sport: Sailing / Boating
Visual: 2D scrolling
Vehicular: Naval / Watercraft
Published by: Psygnosis Limited
Developed by: Psygnosis Limited, Wheelhaus
Released: 1997
Platform: PlayStation (PSX, PS1)
Shipwreckers! (Overboard!) - This is a very fun game in the genre of shooter and puzzle, and with elements of tactics at the same time. In the role of the captain of a small galleon, you navigate your ship through a path full of perils (more than 20 levels) to eventually defeat the dodgy builder Bloufit. The game is divided into levels of interconnected puzzles and is filled with hostile ships and coastguards. The player will be rewarded with treasures, various power-ups and new types of weapons. The game supports three game modes - solo (one player), head-to-head (confrontation of players in split screen mode) and multiplayer (battle of up to five people with a link cable). The perspective of the game is realized from the height of the bird's flight (isometric, top down), graphics and sound at a very good level.

When you swim from port to port, drown ships, choose your ships, equip them with gun turrets, you inevitably get damaged. And together with them new problems. When the ship is badly damaged, not the most courageous team members start leaving it and jumping into the water. And each of them takes away a piece of health from you (and you can completely lose it), but by raising the "brave ones" out of the water (saving them), you restore your health. And if you save the crew members of other ships, you can become a real big guy. This is useful to remember in the mode of several players - this is a great chance to win the game. But it is necessary to act quickly - if the sailor remains in the water for more than 10 seconds, he is Khan!

Such a game can not be completed safely without hidden levels and secret turns and passages. You will find zones that seem to be completely cut off from the ocean. But a careful vzgyad can find a different texture of the wall - here it can be pierced. Discharge your guns into the wall and safely swim through it - find useful premium rooms. The passage of the waterfalls also reveals hidden passages (in previously closed zones), and gives a chance to swim through them. Waterfalls can also extinguish a fire - of course, only in an emergency situation.

Message in a Bottle

By pressing the L1 button, you can "call" the card, which is vital if you still intend to quickly overcome the various stages of the game. It shows the location of all the cities you intend to manage, as well as the location of the bottles. These bottles not only "give" you one more piece of the level card. You can not successfully pass the level, if not all bottles are collected. When you find the final "Jug" - the map will show "Exit".

The main pirate ship you drive is not very effective against some enemy ships, so try to find more power-ups to upgrade your ship and weapons. You can use a balloon (with hot air) to fly through walls. You can turn it into a fun boat and even double the speed.
‹
›
Home
View web version