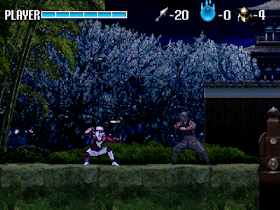 Genre: Action
Perspective: Side view
Gameplay: Arcade
Visual: 2D scrolling
Published by: Vic Tokai
Developed by: Sega AM7 R&D Division
Released: 1995
Platform: SEGA Saturn
Even the most successful console from Sega was awarded with the appearance of its own Shinobi. And all would be nothing, but Sega decided to make a game of the series, which does not belong to the adventures of Joe Musashi, but is a separate story about other people. They did this, although at that time the players were waiting for the direct continuation of Shinobi 3, thereby slightly breaking off the fans of Sega.

The fundamentals of Shaw's control and abilities were taken from Shinobi 3: Return Of The Ninja Master. He also knows how to make a double jump and throw a fan of kunai, except that Shaw can jump around with a katana, a very useful thing. Diving with a foot was replaced with a sword. Block now does not interfere with the movement, and added the ability to beat off enemy shells with a sword. The main weapon now is the sword, and the kunai goes as extra. Magic is also there and now it has become more useful. Poverap now extends only to the sword, when Shoap Shoap is taken, each blow causes the spirit of a certain deity, which, with its touch, causes additional damage to the enemy. Also the game has retained its complexity, the last level with shells will curse for a long time. And the final boss is pleased with its non-triviality.

Like the previous game, this part is more like spin off of the main series, although there already is a clan Oboro and a five ninja. Specifically in this game appears the red ninja Shaw and the blue ninja Kazuma, who betrayed his clan in favor of their ambitions. It is not entirely clear in what time period the action of this game takes place, but most likely to the events of the saga about the Musashi family, because the species here are not so futuristic.
The events unfold after the jump in time Jiro Musashi, but until Zeed managed to curb the whole world.
Background tells us about the recent civil war, followed by a crisis for all ninja clans, including for Oboro. The master ninjitsya chooses three children, in order to convey to them all the secrets of the skill shinobi. Among the chosen ones were the blue ninja Kazuma, the pink Aya, who is the daughter of the master, and the main character is the red ninja Shaw. Fifteen years later Kazuma succumbed to the dark side of the force and demanded from the master to train the final uber technique of the Oboro clan, which he receives a stern refusal. Then Kazuma leaves the clan and vows revenge. Sho and Aya continue to learn from the master and eventually, after the death of the mentor, they learn the final technique of ninjutsu. At this time, Kazuma is announced, who managed to build his bandit organization, and kidnaps Aya, in order to entice Shaw into a trap and still learn the final mega super technique.
By the way, in the plot of this game there are magic colored stones that give an opportunity to use the final technique of the ninja, if you collect them all together. Later on the plot of the series, these stones will be featured in G.G. Shinobi 2: The Silent Fury.

The graphon is made in the new-fashioned at the time Motion capture. Sprites of enemies and characters were created by digitizing live actors. So the game sends greetings to Mortal Kombat. This chip is quite good, although it can not be called good either, the whole problem in animation. Rollers with live actors between the levels are performed in low quality, at the level of the treshachkovy series on the third-rate channel. And in general, these videos impress the perception of their Oscar-winning acting. Honestly, it would be better if they were not at all, because apart from a smile they do not cause anything. The graphics on the levels themselves are quite average for Saturn, although it may be due to a desperate attempt to follow Mortala's fame. Why it was impossible to take graphics from Shinobi 3 and not improve it with the power of the next-generation prefix, I do not understand. As far as I know, Saturn produced excellent 2D graphics. But all this is my personal claim, it is possible that such a graph will be given to someone and to taste.

The soundtrack was directed by Richard Jacques, then still unknown to the inexperienced composer of the European section of Sega. In the future, he will take part in writing the soundtrack for almost all the games about Sonic, up to Sonic Generation. Richard was clearly a fan of the series, because the soundtrack to this game was written specifically in the style of Juso Kosiro. As the information circulated, that the Japanese and European release of this game was written by Yuzo Kosiro himself, but in fact it is not. Simply, Richard very well tried on the music, that would preserve the unique style of the series. In general, the soundtrack turned out to be very good and even diverse, and the music in the cut scenes was also very good and performed in the style of the trash fighters of the seventies and eighties. Soundtrack for North. The American release was completely rewritten in its own peculiar manner, where Yuzo Kosiro did not smell. In my opinion, music in the original Japanese version and European is much better. It is recommended to listen to music from the intro to the end.
‹
›
Home
View web version