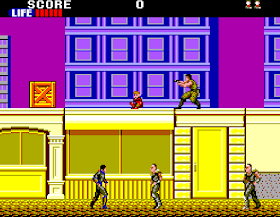 Genre: Action
Perspective: 1st-person, Side view
Gameplay: Arcade, Platform
Visual: 2D scrolling
Published by: SEGA of America
Developed by: Team Shinobi
Released: 1988
Platform: SEGA Master System
Joe Musashi with his skills and techniques Ninjutsu is trying to stop the activities of the criminal organization "Zid", who kidnapped children from his clan. Fighting ninja-actions develop on open spaces of five game levels, the first of which consists of three stages, and all subsequent of four. The final stage of each level - the battle with the powerful boss, whose photos we get at the beginning of the level.
The version of the game for SEGA Master System has retained the main story of the original, but some game mechanics were reworked into a home game console. In the arcade version, players died from spitting or one touch, but on the console, Joe had a health scale. To get to the bonus stages of some levels, it was necessary to save the hostages. And it was very important, because we studied the new ninjutsu techniques just after going through these bonus stages.
A player’s arsenal of weapons could be: three melee weapons, apart from basic punches and kicks, four ranged weapons and six ninjutsu skills. Otherwise, everything remained original - fists, legs and endless shurikens were our hero's main weapon. Receiving appropriate improvements, the shurikens were replaced by a pistol, and instead of fists, Joe started swinging the age-old katana. It was also cool that the fact of Musashi’s contact with opponents was not considered a “blow” and did not cause damage. The hero's health suffered only from direct blows of opponents, abandoned weapons or falling into bottomless pits.
Interestingly, it was the version for SEGA Master System that was widely recognized among critics and players, however, its popularity and the status of “classics” were thoroughly shaken after the release of The Revenge of Shinobi for SEGA Genesis / Mega Drive, the best game of the 16-bit generation of ninja.
‹
›
Home
View web version