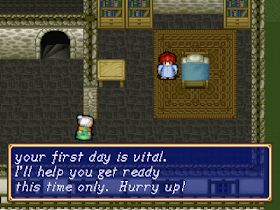 Genre: Action
Perspective: Top-down
Gameplay: Puzzle elements
Setting: Fantasy
Published by: Working Designs
Developed by: Camelot Software Planning
Released: 1996
Platform: SEGA Saturn
Shining Wisdom - the first part in the action shooter of the Shining series. And she is quite unlike her fellow men. There is no standard pumping, and the gameplay is mainly based on solving puzzles a la Legend of Zelda, Landstalker, etc.

Standard / banal / classic (underline). Shining Wisdom is a familiar, painful story about how a knight saves the kingdom. Although the string is rather curious.
A young guy named Mars, decided to follow in the footsteps of his father, the legendary hero - Sir Jiles. For which I settled down to work in the palace guard. It was then that his misadventures began: the entire staff of the castle was put to sleep at night, and the princess was kidnapped. Hunting the criminals, Mars saw an even stranger scene: the princess was replaced by an impostor, and the real was turned into a swan and sent to the forest to be eaten by wild beasts. Win the heart of the princess, punish the scoundrels and, of course, save the kingdom - is it not worthy of a hero?
Above the American version of the game worked the studio Working Designs. Therefore, the translation is excellent, filled with the branded humor of this company. Although the fans of Shining and criticize him for inaccuracies. In particular, many names have been changed, because of which a small connection with Shining Force II is lost. However, this is not critical.

Well, if the plot of Shining Wisdom does not require extensive word-of-mouth, then on the gameplay, we'll stop in more detail. First of all, it is necessary to note some features of management, which at the beginning of the game can cause considerable perplexity and even irritation. First, this is a very strange implementation of the race. To force the character to run it is necessary to quickly hammer on the button Y, thus it is dispersed, as the car, even the scale of a transmission is available. Considering that a huge number of puzzles is based on the run, it obviously does not add to the pleasures. However, if you are playing on an emulator, this is treated by the JoyToKey program, capable of making a Y button a turbo. After that, you can safely forget about this lack.
The second unpleasant feature of control is the swinging of the sword. To get this toothpick in someone is extremely problematic. And given that a huge number of enemies are very bright (often flying) creatures, then I think you can imagine all the frustration of the combat system. Fortunately, this is a problem with only the first weapon. Very soon you will receive long-range flying boxing gloves (a true knight weapon), with which help to deal with enemies will become much easier. And after several hours of play, you still get used to management and stop paying attention to roughness. In addition, there is another entertaining way of attacking enemies - crashing into enemies (right, like the Adol of Ys). The truth here for this and you will take lives. As I said at the beginning, there is no pumping in the game, the hero can be strengthened only by increasing the maximum amount of HP (the scale of the lights), for which, of course, we will have to find the cunningly hidden Life Max Up in the form of crystals.
And now about the main Shining Wisdom chip - a lot of inventory, with which you will have to go through intricate labyrinths. Almost every item in the game has several uses, which depend on which elemental sphere you have activated. This system, I can not help recalling the games of the Castlevania series (in particular Harmony of Dissonance and Lament of Innocence). For example, you have stone boots, with which you can break a fragile floor and move wooden boxes. However, equipping an ice sphere, boots have the ability to freeze water. And so many of your items. By combining all these options, you will successfully advance through the labyrinths.
Locations in Shining Wisdom, although not very long, but very confusing. And some dungeons even shine with a sadistic originality. For example, a mirror labyrinth in which the left and right in control are interchanged. With the help of special shoes you will have to make cunning jumps, and also maneuver on sliding surfaces. But the bosses are virtually all none. Is that some will have to solve the tactics, but it is difficult to lose on them, because in stores you can buy a heap of medicinal herbs, and restore her health in a difficult moment.
Overall, despite some flaws and roughness in control, the Shining Wisdom's gameplay turned out to be interesting. Having got accustomed to the game, you begin to get real pleasure from researching labyrinths and discovering new properties of outfits. And this is the main point.
‹
›
Home
View web version