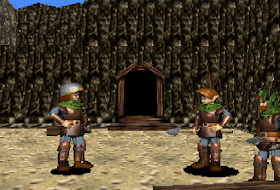 Genre: Role-Playing (RPG)
Perspective: 1st-person
Setting: Fantasy
Pacing: Turn-based
Art: Anime / Manga
Published by: SEGA of America
Developed by: Camelot Software Planning
Released: 1997
Platform: SEGA Saturn
The gameplay is similar to that of Shining in the Darkness. The player explores dungeons and towers with first person view, and battles that take place exclusively in dungeons.
Although the battles have sequences with a first person view, the player can also see the actions of his companions. A unique mechanism is the "pixie" system, where the player can "summon" his "pixies" to fight enemies as a team.

Three mercenaries (Arthur, Melody and Forte) are sent by the King of Enrich to hunt and capture the renegade ninja named Rodi. In the pursuit of the ninja, the mercenaries are seriously injured, but they are quickly cured by strange spirits, while possessing their bodies. Arthur, Melody and Rodi managed to free themselves, but Forte was possessed by an evil spirit. From now on the fight will focus on preventing the re-emergence of a legendary kingdom of more than 1,000 years, whose goal will be to plunge humanity into darkness.

Continuity in the Shining series

"Shinig the Holy Ark" takes place 10 years after Shining Force III. In the tower of Enrich Arthur and the others meet a young boy named Julian. He tells them that his father wanted to investigate a mansion in the forest, but he never returned. Since then Julian is in the care of a friend of the family. It is soon discovered that his father was killed by Galm, one of the Vandals who lived in the dark kingdom era of more than 1,000 years old. The death of his father drives him to take revenge against Galm, who was involved in events corresponding to Shining Force III.
‹
›
Home
View web version