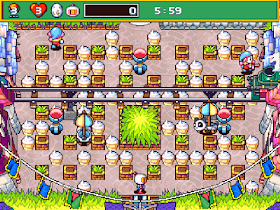 Genre: Action
Perspective: Top-down
Gameplay: Arcade, Puzzle elements
Visual: Fixed / Flip-screen
Interface: Direct Control
Setting: Sci-Fi / Futuristic
Published by: SEGA of America
Developed by: Hudson Soft Company
Released: 1997
Platform: SEGA Saturn
The wick is lit.
It was apparently another common day in the Bomberman routine. As he flew on his patrol, seeking threats to the peace they all liked, Bomberman stumbled over something that could possibly turn everything to ruins. Right at the bottom of the tangle of forest plants a glow caught the attention of the Bomberman's attentive eyes. Rising from the green depth, the crystal tower emerged. But the crystals that held the terrible Crator monster trapped inside the tower were gone, as was Crator himself. Then a radio message popped up inside the cockpit. It was Dr.I ...
"Bomberman, Mr Meanie (Mujoe in Japan) has released Crator and is using his powers to conquer the world! You have to recover the crystals before it's too late!" Meanieland Amusement Park is your secret base. ! "
It is up to Bomberman to regain control of the crystals and restore order to the ruined planet by crushing the evil Mr. Meanie on the way. And so, a new chapter in the struggle between good and evil begins ...
Like most Bomberman games, Saturn Bomberman has a battle mode as well as a story mode. Next to them is the master mode, in which the player must finish a series of levels and then is assigned a ranking to the player based on the time spent to finish them. This time is then saved in memory and kept on a scoreboard for future reference. The game also features several new powerups.
Saturn Bomberman uses helper dinosaurs, which are initially found in eggs that are released by destroying soft blocks. Dinosaurs come in three levels: Infants (the weakest), teenagers and adults (the strongest) the punctuation helps them to evolve from stage. Dinosaurs can only take an attack no matter what level it is. If the player is mounted on a dinosaur when receiving an attack, the dinosaur takes damage instead. When powerups are collected, a special bar at the top of the screen fills up slowly. When this bar is complete the dinosaur goes up one level, going from baby to adolescent or from adolescent to adult. However, in battle mode the system works differently. When the player collects an egg mounted on a dinosaur it will grow. The player can exit the dinosaur at any time.

Saturn Bomberman has a story mode that can be played by one or two players.
Story mode levels involve blasting posts with a bright red sphere at the top (known as Zarfs) by avoiding (or destroying) enemies, blasting blocks and collecting powerups. When all Zarfs of a level are destroyed an exit appears. Upon entering the exit the Bomberman makes a victory pose and a short scene appears. The scene shows a piece of the scenery moving out of the way, so the Bomberman goes through it and then something closes the way he went. After the scene the next level starts.

Saturn Bomberman supports up to 10 human players in battle mode with the use of 2 Multi-taps, 7 players with only one Multi-tap, or only 2 players without any Multi-tap.
If the number of players in a game is greater than eight, the game is played in a panoramic arena, leaving characters and blocks with tiny proportions, making the playing field much larger. This also disables many of the powerups, including the dinosaurs.
‹
›
Home
View web version