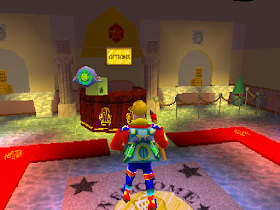 Genre: Action
Perspective: 3rd-person
Gameplay: Puzzle elements
Setting: Sci-Fi / Futuristic
Published by: Psygnosis Limited
Developed by: Slippery Snake
Released: 1998
Platform: PlayStation (PSX, PS1)
Rosco McQueen is an action and platform game in real time 3d that is divided into different levels.
The main goal is to cross environments to save "hostages", while fighting robots and mainly fire. Indeed, when the fire burns too long, health skyrockets.
The player embodies a heroic fireman equipped with an ax and a water lance. With the ax he can destroy his enemies and certain objects, while with the spear he must extinguish the fires. This simple gameplay is nonetheless catchy, because if some lights are lit as soon as you enter a room, the enemies also trigger fires that the player must master. The latter is therefore to manage several things at once, in space and time. If the gamelplay of the spear is pointed, the movement and fights hazard, which gives the game a certain difficulty, especially since some acrobatics are necessary to progress.
Items are present in the levels to help the progression: they go back the health bar of the character, or that of the water tank.
The game also incorporates small elements of simple reflection in its progression: keys to find, mechanisms to operate, etc.
Note also that the levels are linked to a boss.
‹
›
Home
View web version