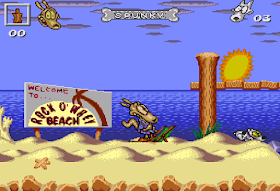 Genre: Action
Perspective: Side view
Gameplay: Arcade, Platform, Puzzle elements
Visual: 2D scrolling
Published by: Viacom New Media
Developed by: Viacom New Media
Released: 1994
Platform: Super Nintendo (SNES)
Rocko's Modern Life is a side-scrolling action game where the player takes control of the Nickelodeon character, Rocko, as they travel through three different stages (Rock-O-Whey Beach, Hill-O-Stench garbage dump, and Laundryland) trying to protect his beloved dog Spunky from the various dangers throughout the stages.
As Rocko travels through the stage, he has to perform various tasks to keep Spunky out of danger such as tossing him above onto safer platforms, moving objects to break his fall or fight off various enemies that want to harm him.
There is no time limit and the game starts out with lives, with a health bar for Spunky while the player's character, Rocko, cannot be hurt. The story is told through comic-style panels and features the classic characters such as Heffer, the Bigheads and Earl the local bulldog.
‹
›
Home
View web version