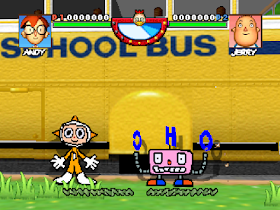 Genre: Action
Perspective: Side view
Gameplay: Fighting
Art: Anime / Manga
Published by: Konami Co.
Developed by: Konami Computer Entertainment Kobe
Released: 1998
Platform: Nintendo 64 (N64)
The whole game, in a good way, is the children's drawings. In fact, this is a fighting game in which children participate, namely their imagination. Many of us liked to draw and embodied their fantasies on paper, that's the principle and the game was developed. The children gathered and quietly, peacefully, through drawing, began to find out the relationship, who has the imagination will be more inventive and won. And it's true, all the painted fighters are not one permanent figure, striking standard blows, but a set of drawings, each responsible for its function. In addition to the usual set of techniques, in the arsenal of each child there is a bunch of felt-tip pens, yes it is by filling the scale of the number of markers in your arsenal that you make this or that special technique that looks very impressive. Despite its children's appearance, the game is far from simple and can even drag out an experienced player.
‹
›
Home
View web version