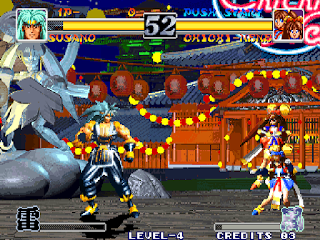 Genre: Action
Perspective: Side view
Gameplay: Arcade, Fighting
Published by: Saurus Co.
Developed by: System Vision
Released: 1996
Platform: Neo-Geo
The developers wanted to make this fighting game 3D. They succeeded. Here you are offered eight players. Everyone is endowed with his own set of various techniques. Also, you can perform special attacks (holding down the A + B + C buttons). They look pretty impressive. Dodging attacks of an opponent, you can literally soar in the air. The design of the stages is also devoted to a 3D view. With the atmosphere of the game, the musical accompaniment, qualitatively selected by the developers, is well combined.
‹
›
Home
View web version