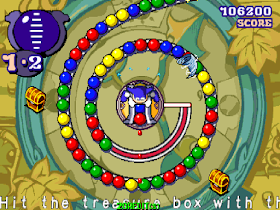 Genre: Puzzle
Perspective: Top-down
Gameplay: Arcade, Tile Matching Puzzle
Pacing: Real-Time
Visual: Fixed / Flip-screen
Published by: Mitchell Corporation
Developed by: Mitchell Corporation
Released: 1998
Platforms: Arcade Machine, PlayStation (PSX, PS1)
Quite an interesting puzzle in which your task is to shoot the required shell on the right balls of different colors. Before the game starts, you can choose from 4 modes: Stage, Power, Panic and Vs. Stage - you progress through different stages, where your mission will be prevented by various factors such as storm or anything else, plus there is an opportunity to pick up some kind of bonus for example a giant gem. Power - there are except balls of different colors, there are also special cubes, the main feature of which is that if they have one color, they begin to attract each other and destroy everything that is between them. Having accumulated 3 cube or a ball of the same color, they are destroyed, it is desirable to build combinations because they are given more points for them. Panic - everything here is simple, nothing special except for an enlarged spiral, which becomes much more difficult. Vs is a player-versus-player mode, who will destroy 200 balls that one and win.
‹
›
Home
View web version