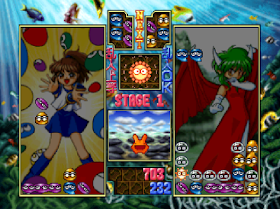 Genre: Puzzle
Perspective: Side view
Gameplay: Arcade, Falling Block Puzzle
Visual: Fixed / Flip-screen
Art: Anime / Manga
Pacing: Real-Time
Interface: Direct Control
Published by: Compile
Developed by: Compile
Released: 1997
Platform: Nintendo 64 (N64)
Another branch in the Puyo Puyo line under the "warm" name "Sun", which means sunny. And the name does not lie, the whole game is filled with joy and fun, and the musical motifs resemble the Hawaiian, you immediately imagine the sun, the sea, the sand. As for the gameplay itself, throughout the series it has not changed at all, only the modes change. These are the most modes here a whole lot: passing, there is a choice of 3 characters; game with a choice of speed; battle against a friend; a tournament where there is a choice not only from the main characters, but also their rivals and the 4th, consisting of 3 original ones, the most interesting of which, in my opinion, is a puzzle where any person from the game sets a certain combination of ball- blocks, which you need to contrive to repeat. In a word, the old kind game in the new packaging.
‹
›
Home
View web version