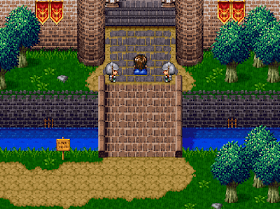 Genre: Role-Playing (RPG)
Art: Anime / Manga
Published by: Increment-P
Developed by: Increment-P
Released: 1998
Platform: SEGA Saturn
While the gameplay can be described as a classic turn-based role-playing video game, the main focus of the game is on interacting with the non-player characters and discovering what they are up to. The story is set in the Kingdom of Dilma, with a cast of royalty who engage in all sorts of strange antics, and is filled with silly humor, which includes most of the characters being named after various kinds of food, and transgender humor in the style of Ranma.

Five princesses from surrounding kingdoms are visiting Granmalnie Castle, but young Prince Tapioca isn't showing much interest. Meanwhile, someone makes off with a valuable item. Queen Madeleine hires a young swordsman named Willow to investigate the theft. Willow is joined by Pal, a magical creature who transforms Willow into a girl, named Will. Using this disguise, Willow tries to gain the trust of the princesses, in hopes of determining who is responsible for the theft.
‹
›
Home
View web version