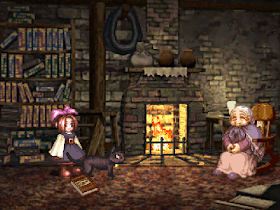 Genre: Action, Role-Playing (RPG)
Perspective: 3rd-person, Side view
Art: Anime / Manga
Setting: Fantasy
Published by: Atlus Co.
Developed by: Atlus Co, Racdym
Released: 1997
Platform: SEGA Saturn
The gameplay of Princess Crown revolves around a few important mechanics. These include visiting cities, going on missions, gathering information, challenging bosses, and participating in battles. The game has a linear history. Princess Crown is played on a perceptual side scrolling; Therefore, the possibility of getting lost on a map is small.
The exploration of the game resembles that of Zelda II or Castlevania II. Exploration can be done through cities and roads. The cities are full of non-playable characters who have the necessary information to advance the game.
The encounters involve a combination of fighting elements and elements of role play. The battle system is simple but challenging. The mechanics used include an attack command, surveillance, evasion, elements and recovery. As a side-scrolling RPG, it focuses primarily on spacing, time, reading, knowledge and avoidance. What makes this game special is its power indicator, which is depleted by several actions. If it runs out, then the character will be out of breath, necessary to protect, evade and attack.
The use of articles plays an important role in Princess Crown. This includes armor, recovery, magic and throwing objects.
Princess Crown begins with a girl and her grandmother. The girl collects a book and her grandmother begins to read the story of Princess Gradriel De Valendia, thirteen years old. The player assumes the role of Princess Gradriel throughout his adventure as he travels through the kingdom of Valendia wishing to solve his many problems with his own hands. However, Gradriel finds more problems than he could have imagined.
After completing the story of Princess Gradriel, more books are available, allowing players to take on the roles of three characters that Gradriel has met on his journey. Edward Glowstar is a gentlemanly gentleman on a quest to avenge his father and becomes a valuable ally for the princess. Proserpina is a naughty witch, which the player must face several times throughout the history of Gradriel. Portgus Chrisford is a friendly pirate, whom Gradriel encounters for the first time when another pirate commits unfair acts using the name of Portgus. These three Books are considerably shorter than the first.
‹
›
Home
View web version