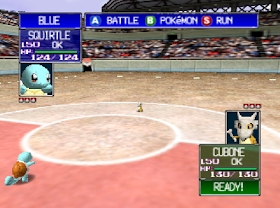 Genre: Strategy / Tactics
Perspective: Bird's-eye view
Pacing: Turn-based
Published by: Nintendo Co.
Developed by: HAL Laboratory, Inc., Nintendo Co.
Released: 1998
Platform: Nintendo 64 (N64)
Quite an unusual fighting game. You participate in the Pokémon competition and fight for the championship. You play for Ash and his Pokémon, you can choose up to 6 balls: 3 basic and 3 substitutions. Management is the following - to put the pokeballs you have to press "A" for the first, "C - upper" for the second and "Z" for the third. Next: for the attack "A" and one of the buttons "C", and for the replacement: "B" and one of the "C" buttons.
‹
›
Home
View web version