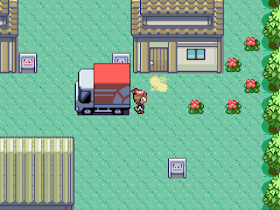 Genre: Role-Playing (RPG)
Perspective: Bird's-eye view
Gameplay: Japanese-style RPG (JRPG)
Art: Anime / Manga
Pacing: Turn-based
Setting: Fantasy
Published by: Nintendo of America Inc.
Developed by: Creatures, Game Freak
Released: 2003
Platform: Game Boy Advance (GBA)
Compared with previous games, the gameplay has not changed much; at the disposal of the player is given the main character - a boy or a girl, just like it was in the previous games of the series. Previously, there were also the goals of the game: to catch all available Pokémon and to defeat the best coaches of the region - the so-called Elite Four. The main storyline includes fighting with a local criminal organization seeking to gain control over the region. New functions have been added, including a battle between the two opponents and the special Abilities of each Pokémon. In connection with the increase in the power of the console it became possible to play together four players instead of two. In addition, Nintendo e-Reader support and integration with other "advanced generation" games have been added.
Ruby and Sapphire received mostly positive feedback from journalists, although they were divided in opinion about graphics and gameplay. Most of the negative feedback is drawn to the fact that the gameplay has not changed much compared to previous generations. The fall in the popularity of Pokémon and the popularity of the series Yu-Gi-Oh! did not allow sales to rise above previous generations. Nevertheless, the games are still successful from a commercial point of view: after the realization of more than 13 million copies worldwide, they have become the best-selling product for Game Boy Advance in the history of the console.
‹
›
Home
View web version