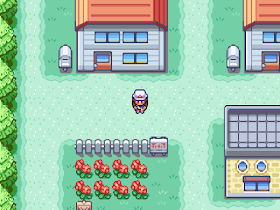 Genre: Role-Playing (RPG)
Perspective: Bird's-eye view
Gameplay: Japanese-style RPG (JRPG)
Art: Anime / Manga
Pacing: Turn-based
Setting: Fantasy
Published by: Nintendo of America Inc.
Developed by: Creatures, Game Freak
Released: 2004
Platform: Game Boy Advance (GBA)
Who has not heard of Pokémon? This line of unique JRPG and anime-animated series in its support generated a whole subgenre of role-playing video games. The first generation of experimental in 1996, the series was a game under the brands Red and Blue. For the Gameboy, this was a real revelation - where would you meet an RPG with 150 managed characters in the team? The consoles have changed, new versions have appeared - Gold and Silver, Ruby and Sapphire, Diamond and Pearl, Black and White ... The Pokémon universe continues to grow, and the gameplay grows with new features that are not always unambiguously perceived by the old fans of the series. Pokemon FireRed is an attempt to return to the origins of the series, not forgetting the new generations of Pokémon that emerged in a decade. Now there are more than 350 of them! In this RPG you can really play for years. In the story, the player goes on a journey to become the best Pokémon coach. He has to learn a lot about the world around him and about the creatures that inhabit him. The main difference of the remake from the original game is that after the victory in the Pokémon League you can visit the Rainbow Islands with a lot of new quests (these are not the Orange Islands with their own Pokémon League, but here too there is something to do). From the very beginning, Pokémon can study attacks from the second and third generations, and some Pokémon of the second and third generations can be found on the Iridescent Islands. Each Pokemon, having reached a certain level of development, can evolve. And the Pokémon of different sexes of the same species may have an egg, from which the hatch will later hatch. Some Pokémon in the game can only be obtained through evolution or breeding. Do you want to get them all?
‹
›
Home
View web version