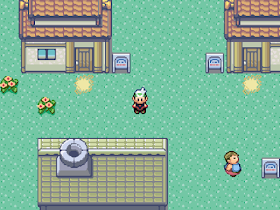 Genre: Role-Playing (RPG)
Perspective: Bird's-eye view
Gameplay: Japanese-style RPG (JRPG)
Art: Anime / Manga
Pacing: Turn-based
Setting: Fantasy
Published by: Nintendo of America Inc.
Developed by: Creatures, Game Freak
Released: 2005
Platform: Game Boy Advance (GBA)
Before exploring the world of Pokemon, you are instructed by professor Birch who will tell you about the friendship between people and the pocket monsters. Teamwork, battles, games and recreation are the main components of their relationship. As in many universes, your hero (boy or girl) will be asked to choose a Pokemon creature and develop his skills to the maximum level, and you can increase the number of your creatures by catching them in a pokeball. The beginning of your career will begin in the small town of Litlruth. An alternative version of Pokemon - Sapphire Version, there is not only other initial Pokemon, but also rare pocket monsters which can be caught only in this version of the game for GBA. Added pair battles, which completely changes the strategy of the first generation of games about Pokemon.
‹
›
Home
View web version