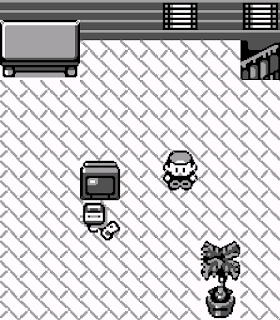 Genre: Role-Playing (RPG)
Perspective: Bird's-eye view
Gameplay: Japanese-style RPG (JRPG)
Pacing: Turn-based
Setting: Fantasy
Published by: Nintendo of America Inc.
Developed by: Creatures, Game Freak, Nintendo Co.
Released: 1998
Platform: Game Boy
Speaking as a young coach of pocket creatures, you begin a combat journey to collect all Pokemon BLUE versions (which has 151 creatures that can be fully assembled, only with the RED version) of the game. The many fights that happen when traveling through the grass and the oncoming calls of other coaches will be in your career as a pokemaster whose goal is to achieve the highest possible level and the last form of transformation of your creatures. The battles take place in turn-based mode, in which you can specify the type of attack, use inventory, escape from the battlefield, and call another Pokemon. Using a pokeshar, your hero can catch a creature that has been encountered, and continue to train with him, causing him to fight. Minor differences of different versions of the game, mainly offer different types of Pokemon that can be exchanged between the characters.
‹
›
Home
View web version