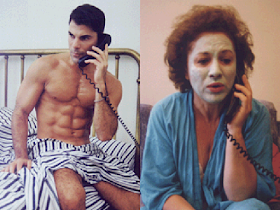 Genre: Adventure
Perspective: 3rd-person
Gameplay: Dating Simulation
Art: Full Motion Video (FMV)
Interface: Point and Select
Narrative: Adult, Comedy, Romance
Published by: Kirin Entertainment
Developed by: Kirin Entertainment
Released: 1994
Platform: 3DO Interactive Multiplayer
The game tells about John and Jane, who, under the pressure of their parents, find each other. The player plays for both characters simultaneously.
Plumbers Do not Wear Ties received negative reviews for a meaningless plot, a miserable acting game, primitive performance, the use of cliches, slideshows instead of videos, not cut out unsuccessful duplicates, absurd moments, strange photos in captions, tightness and excessive accent almost on each act of characters, inappropriate use of color filters. As a result, the game is considered one of the worst in history.
The only interactive part is the selection screens from several options (as in DVD-games). This brings the player points and this affects the development of the plot.
‹
›
Home
View web version