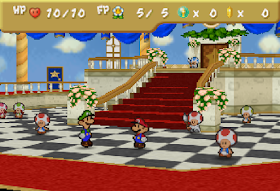 Genre: Role-Playing (RPG)
Perspective: Side view
Gameplay: Platform
Pacing: Turn-based
Published by: Nintendo of America Inc.
Developed by: Intelligent Systems Co.
Released: 2002
Platform: Nintendo 64 (N64)
In fact, the game is an RPG with the elements of the quest. Heroes of the series about Mario performed in a "paper" form, as well as the surrounding landscape. This does not spoil the graphics, but adds originality and unusualness to the gameplay. So, Mario and Luigi receive a letter from Princess Peach, who invites them to the Sabantuy. However, in the midst of the meeting, the Princess's castle attacks something strange, and besides, Bowser appears. He sends Mario into a knockout (who would have thought ...), and he falls from heaven, no one knows where. In a dream, he sees strange talking stars. Hence the adventure begins. Mario runs back and forth, fighting with enemies, looking for different things, talking with characters and using their help - in general, the action is interesting.
‹
›
Home
View web version