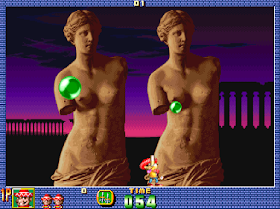 Genre: Action
Perspective: Side view
Gameplay: Shooter
Published by: Capcom Co.
Developed by: Mitchell Corporation
Released: 1995
Platform: Arcade Machine
The player tries to burst with a harpoon balloons, which have similar characteristics as rubber balls. If a balloon is hit, it divides into two smaller ones. Depending on the size of these parts is a maximum of three times possible. The fourth time the balloon disappears from the field.
If the player ever touches a balloon, he loses a life. After the loss of the third life, the game is over.
Randomly, splitting the balloons leaves power-ups for the player to collect. These allow, for example, the shooting with a second harpoon or equips them with barbs. In addition to other weapons, the player can also find a shield or items that manipulate the timing of the balloons.
‹
›
Home
View web version