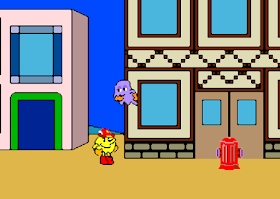 The player must bring the fairy that is under Pacman's hat to the fairies country and return to the house. Avoid obstacles such as ghosts, water jets and quicksand. If the time ends before the end of the round, the purple ghost, who previously moved at a safe distance from the player, begins to chase him.
The penultimate campaign ends with Pakman returning the fairy under the hat to the fairy queen. In exchange, he receives magic boots. In the last round, the Pac-man moves back home. Magic boots allow you to jump, already being in the air. At home he is met by Mrs. Pakman and Pacman Jr.. After that, the next campaign begins with the same goals, but increased complexity.
On some systems, the game is different in control, where the action buttons denote movement, and the cross is a jump.

Pac-Land has been ported to many home gaming consoles and computers, including Commodore 64, Commodore Amiga, Atari Lynx, Atari ST, TurboGrafx-16, ZX Spectrum, Amstrad CPC, MSX and NES. Pac-Land was reissued in 1996 as part of the Namco Museum Volume 4 for the PlayStation.
‹
›
Home
View web version