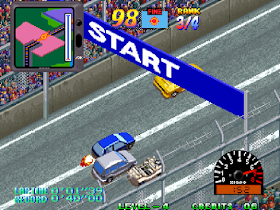 Genre: Racing / Driving
Perspective: Bird's-eye view
Visual: 2D scrolling
Interface: Direct Control
Vehicular: Automobile, Off-roading
Published by: SNK Corporation
Developed by: SNK Corporation
Released: 1996
Platform: Neo-Geo
The game belongs to the genre of racing. Impressive initial 3D intro. There are eight cars of different classes, among which there is a motorcycle. Each has its own technical characteristics. During the race, you can even use a horn and lights. Management at first seems a little uncomfortable, but gradually you get used to it. A successful view of the camera and drawing graphics give a voluminous look to the game. Also, a good variety of tracks look good. They are filled with a multitude of springboards and objects. If you crash into barrels, they will explode spectacularly. You can get your opponents off the track in order to come first. The musical accompaniment is qualitatively chosen for the atmosphere of the game.
‹
›
Home
View web version