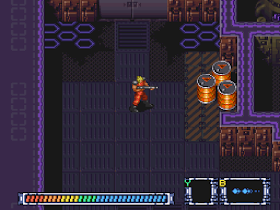 Genre: Action
Perspective: Top-down
Gameplay: Arcade, Shooter
Setting: Sci-Fi / Futuristic
Narrative: Horror
Published by: Jaleco USA
Developed by: Jaleco Ltd.
Released: 1993
Platform: Super Nintendo (SNES)
Enough dynamic action. The hero breaks into a certain structure. Around the twilight. But very soon we understand from what. An alien creature sucked into an energetic setup. By destroying them we will see how many mechanisms have worked. It would have been better if we did not do this, the hordes of enemies poured out from everywhere! After blowing up the barrels in the "Operation Logic Bomb" the player will destroy the wall, which will open the passage to the generator on which the nightmarish alien creature was encased.
‹
›
Home
View web version