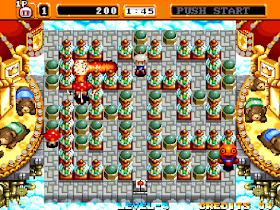 In this mode the player moves through different areas full of monsters whose goal is to eliminate them all in a time limit to access the next area. Playing as a bomberman, the player can put bombs to destroy the blocks that block the way, being able to move freely throughout the area and be able to destroy all the monsters in order to access the next area. By destroying some of the blocks scattered throughout the area it is possible to find various objects that help the player advance the game, including remote control bombs, accelerators and hearts.
It is also possible to play 2 players in this mode simultaneously. Handling one to the white bomberman and another to the black bomberman, the objective is the same as if a single player played, destroy all the monsters in the area to advance to the next area. In this case, to have 2 players, there is more chance of success in the game to be able to help each other players.

In Battle Mode, 1 or 2 players can face up to 2 players controlled by the computer in one of 10 scenarios designed specifically for the multiplayer game. The clashes can be fought as battles of all against all or as battles by teams. As in the Adventure Mode, here you can also use different objects to help beat the other players. Among the objects include:
Extra pumps: Give more pumps.
Fire power: An object in the form of fire that increases the radius of explosion of the bombs.
Skates: Increase travel speed.
Boots: Give the bomberman the ability to kick bombs away from him.
Gloves: Allows to catch and throw the bombs. If another bomberman is hit from the side or back with the bomb, his objects come to the board again.
Skull: It infects the bomberman, making him put all the bombs he has, walking fast or slow, inverting the controls, decreasing the explosion radius of the bombs or prolonging the detonation time of the bomb.
Egg: Contains monsters that can be mounted.
The characters in battle mode are the following: White, Black, Net, Blue.
Rubber: It becomes a mass of rubber that can move on the blocks of the board.
Fake: It can take the form of the blocks that are in the game or failing takes the form of a bomb to camouflage in battle.
Cat: Uses a power that allows you to run randomly to steal your opponent's objects when you touch them.
Honey: Transform your bombs into hearts that run quickly and randomly in the game area exploding at any time.
Hayate: With your ninja skills you can put fake bombs, to fool your opponent.
Kotetsu: Using your samurai sword you can teleport to another place.
Gold: You can run quickly through the game area.
Atomic: It uses a shield to avoid the damages caused by the explosions.
In addition the characters have the possibility of finding eggs of two types, mechanical or biological, in which there are monsters that can be mounted to help them in battle.
The monsters of mechanical eggs are:
Nucha: It's a jellyfish, it can walk on the blocks of the game.
Dokyunn: It's a missile, it can be fired at the opponent.
Ridge Racer: You can move quickly on the battlefield.
Charge: Runs randomly across the battlefield, stealing the opponent's objects when he touches them.
Gaikottsu: It is a skull with horns, it infects the opponent as a skull would in the game.
The monsters of biological eggs are:
Mr. Bird: It is a blue bird that lifts the bombs with its beak and throws them to another place on the battlefield.
Baketama: It is a tadpole that transforms the bombs that it puts in blocks, to deceive the enemy.
Carry: Walk too slow on the board.
Dachon: It's an ostrich, it moves with a lot of speed on the battlefield.
Tamagon: It is an egg that destroys itself and destroys all the blocks of the battlefield.
‹
›
Home
View web version