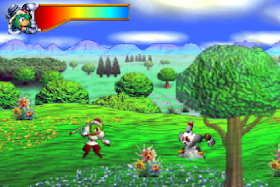 Genre: Action
Perspective: 3rd-person, Side view
Gameplay: Platform
Art: Anime / Manga
Setting: Sci-Fi / Futuristic
Published by: Nintendo of America Inc.
Developed by: Treasure Co.
Released: 1997
Platform: Nintendo 64 (N64)
You control a heroine named Marina. She must fulfill the mission of saving all peaceful citizens from the evil influence of the Empire of Evil. The usual plot, in a word. Marina has a variety of skills that are revealed by communicating with the surrounding characters (if they can not be understood independently). In general, the game is decent, interesting and quality.
‹
›
Home
View web version