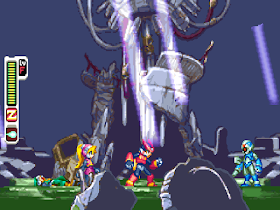 Genre: Action
Perspective: Side view
Gameplay: Metroidvania, Platform, Shooter
Visual: 2D scrolling
Art: Anime / Manga
Setting: Sci-Fi / Futuristic
Published by: Capcom Entertainment
Developed by: Inti Creates Co.
Released: 2002
Platform: Game Boy Advance (GBA)
It's been 102 years since Zero met the last time a virtual creature known as Sigma. Now he woke up in the future. The government of Neo Arcadia is afraid of the next uprising Reploid, begins a campaign to get rid of these forms of life. However, in the ruins of the old town, a scientist named Ciel and the Reploids helping her have managed to revive Zero, and this is their only hope of salvation. Players do not have a wide selection of stages. Managing the leader of the resistance Siel, you pass consistently level by level, and in between them Zero can walk along the corridors of the Ciel base, talk with people and find useful information. In addition, there were new characters, Cyber-elves, good assistants. Thanks to them, Zero gets additional or more advanced abilities, in particular, additional health, shields, the ability to run much faster and so on. In addition, Zero retained all his basic techniques from previous games: the ability to deal powerful blows, jump, perform jumps, pushing his feet against the wall. Initially, he is armed only with the main long-range weapons, but soon becomes the owner of a powerful saber Z-Saber, as well as a variety of long-range weapons and hand-to-hand combat weapons. When a hero constantly uses a weapon, his power rises, which is especially important in the battles with the boss. When you defeat certain bosses, you get an elemental icon, and Zero can use it, as if to build it into his weapon, and perform elemental attacks. In this case, you need to take into account that all bosses are sensitive to one elemental attacks and are afraid of them, while others simply do not act on them. Hence, the success in the mission and the rank that you receive at the end depends on how clever and tactically you competently fight with the enemies, and then the saved time in this stage, the health and other factors that determine your final rank. The players have only one life to complete each stage, but the continuation can, of course, be used, but then you have to start all over again.
‹
›
Home
View web version